Chicago vs. Cleveland: Who Wins the World Series of Golf? 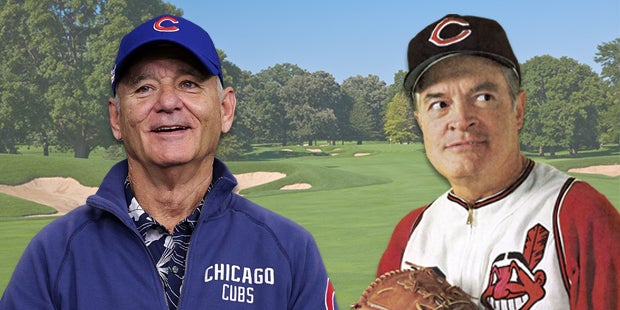 Bill Murray and Bob Hope are the resident big hitting golfers in Chicago and Cleveland. But which team has the prowess to come out on top of the World Series of Golf?
Kaitlin Santanna

To help sort out the balls and strikes when the Chicago Cubs meet the Cleveland Indians in the 2016 World Series, turn to the experts at Sports Illustrated. As for the golf battle, here’s how we see it.

Any course that’s undergone as many changes as Medinah can no longer claim an all-world design, but its flair for producing major drama has been borne out again and again. Witness Hale Irwin’s 1990 U.S. Open heroics, Tiger’s unforgettable duel with Sergio in the 1999 PGA and the rash of critical putts the Europeans made at the 2012 Ryder Cup. Brutally long, this well-treed layout is mostly straightforward, with three par 3s that play over 30-acre Lake Kadijah.

Loaded with golf history, Canterbury was the scene for Jack Nicklaus’ record-setting 14th major, when he captured the 1973 PGA Championship. It also played host to the 1940 and 1946 U.S. Opens, among other big events. The 1922 Herbert Strong parkland design is packed into a small space and is renowned for its sloping terrain, small, tilted greens, and rugged trio of finishing holes — the 608-yard, par-5 16th, the 232-yard, par-3 17th and the uphill, 430-yard, par-4 18th. This one is a surprisingly close call, with Medinah’s recent Ryder Cup the difference-maker.

Cleveland features a fistful of fine public spreads, from Hurdzan-Fry’s Little Mountain to Donald Ross’ Manakiki to Stanley Thompson’s Sleepy Hollow. Our pick is Fowler’s Mill, one of Pete Dye’s earlier efforts, crafted in conjunction with his brother Roy in 1972, which offers glimpses of the style that would define him, with railroad ties, split fairways and demanding water holes. Still, this one’s no contest. Let’s take Cleveland’s manager first, the man affectionately known as “Tito,” who several years ago told Cleveland.com that other than baseball, his favorite sport is golf. In 2012, in between his gigs as Red Sox manager and his current one in Cleveland, he was an ESPN broadcaster and said, “Golf is one of my biggest passions. I love it. Working with ESPN this summer, I got down to a 5 (handicap), but don’t tell the guys I play with that. They think I’m an 8.” In 2015, when word came down that an Indians front office executive had moved on to a new post with the Toronto Blue Jays, Francona was playing Pebble Beach with several of his coaches when he received the news.

The Cubs’ skipper is no match for Francona in terms of golf skill, but he does have the best name ever for his charity golf tournament, Joe Maddon’s “Try Not to Suck” Celebrity Golf Classic. Held on August 15 at Bryn Mawr Country Club in Lincolnwood, Ill., the event benefits Maddon’s Respect 90 Foundation charities. The number 90 represents the number of feet between home plate and first base, with an exhortation to run hard the entire way. “Try not to suck” were also the now-legendary words he issued to centerfielder Javier Baez when the infielder returned to the team in the summer of 2015. Great name, great cause…but Francona still brings a little more game.

(MORE: How the Golf Course Helps the Cubs Pitching Staff)

No modern comic actor has so indelibly fused his goofy persona with his love of golf as Murray. A very respectable player who carried a 7 handicap, Murray grew up caddying at Indian Hill in suburban Chicago, and with his brother, Brian Doyle Murray, used the stories they accumulated to great effect when it came time to filming one of golf’s iconic movies, 1980’s “Caddyshack.” He has also been an endlessly entertaining, if occasionally exasperating fixture at many celebrity events, notably the AT&T Pebble Beach National Pro-Am.

Still, Murray takes a backseat to Leslie Townes Hope, who moved to Cleveland from England at the age of four. Hope’s influence on golf is nearly immeasurable. He played more than two thousand different golf courses in his 99 years, the first being Highland Park in Cleveland. He teed it up with many U.S. Presidents, kings, and the King, Arnold Palmer. A steady 6 handicap in his prime, he got down to a 4 in 1951, the year he competed in the British Amateur at Royal Porthcawl in Wales. In 1965, the Palm Springs PGA Tour stop became the Bob Hope Desert Classic, a name it held onto in some form through 2011. Hope was elected to the World Golf Hall of Fame in 1983—and was a longtime part-owner of the Cleveland Indians. We love Bill Murray, but this one’s a no-brainer. Let’s just admit up front: It’s bizarre for a city of Chicago’s sports greatness—and golf greatness—to somehow be missing a home-grown world-class golf talent. That goes for men and women. Sluman, who captured the 1988 PGA Championship at Oak Tree in Oklahoma, comes closest. The Windy City resident is a Chicago sports fanatic, from Da Bears to the Cubbies to the Bulls, where he’s been a longtime season ticket-holder.

But Sluman was born and raised in Rochester, N.Y. and spent his college years in Florida. Weiskopf, who hoisted the Claret Jug at Royal Troon in 1973, was born in Massillon, 50 miles south of Cleveland, moved to suburban Bedford, attended Benedictine High in Cleveland and became an Ohio State Buckeye, a few hours away, in his college years.

Harborside International’s two championship tracks, the Port and the Starboard, both can boast of many outstanding vistas of downtown Chicago from multiple tee boxes. In addition, an ancient nine-hole muni, Sydney Marovitz Golf Course (formerly Waveland) is splashed in the center of it all, between bustling Lake Shore Drive and Lake Michigan. And Tiger Woods and Mark Rolfing are potentially involved with linking two other urban munis, Jackson Park and South Shore, which also enjoy stunning skyline views. Cleveland, unfortunately, has no golf presence in its inner core, nor any distant courses that take in cityscapes. And the Winner is…

It’s going the distance, but Chicago and its stronger downtown golf identity wins the golf competition—and the World Series—4 and 3, or make it 4 games to 3.