Chi Chi Rodriguez: ‘A Round With’ Interview with Jessica Marksbury 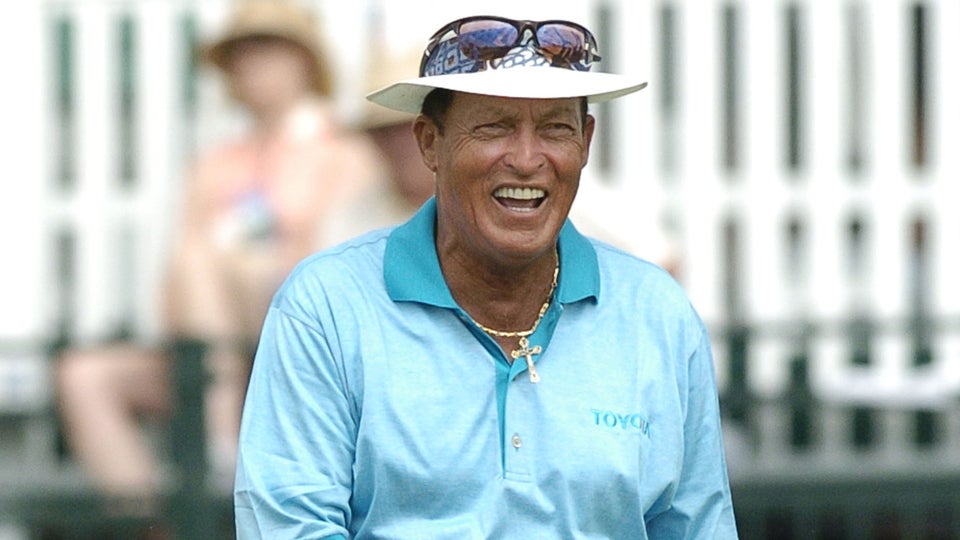 The legendary Hall of Famer, now 80, talks scotch, “bull” fighting and getting the best of Jack and Arnie.

We’re drinking Johnnie Walker Black Label. Have you always been a scotch fan?

I [generally] drink Johnnie Walker Blue, but I haven’t had a drink in six months. I lost four inches off my waist. I’m trying to get in shape so I can go back to the Senior Tour one more time.

Really? And I’m corrupting you!

They have a new division where you have to be at least 80 years old. You play three days for a million dollars, one hole a day, and if you can remember what you shot, you win! [Laughs]

You’re still a jokester. I remember watching you on TV celebrating a birdie. You’d use your putter as a sword to kill an imaginary bull. How’d that start?

I [used to put] my hat over the hole after I made a birdie. Some pros — more like has-beens who never were! — complained that I was damaging the hole. So I decided the hole was a bull, and I was a bullfighter. And I had to kill the bull.

What kind of reaction did you get the first time you did it?

I don’t remember, but when I quit playing the Tour, I started doing it for double bogeys instead of birdies. [Laughs]

WATCH: ‘A Round’ With Natalie Gulbis

You won eight PGA Tour events, and then a whopping 22 more on the Champions Tour. What made the difference?

Most everybody [on the Champions Tour] was out of shape, and they were older. Arnold Palmer and Jack Nicklaus — especially Arnie — he used to beat my brains out when we were young. In the end, I got even. I started beating him up. And that felt really good.

Did anyone have more fun than you did as a pro?

I think Gary Player did. And maybe Doug Sanders and Lee Trevino. We had some real characters.

Is pro golf less fun now than it used to be?

No, I think the game is still fun. When you’re making $22 million like [Jordan Spieth], it’s time to smile. [Laughs]

You and your wife, Iwalani, have been happily married for more than 50 years. What’s the secret?

It’s simple. Let your wife win all the battles, and you’ll win the war.