As a Las Vegas resident and former UNLV golfer, Charley Hoffman was hit hard by the horrific Mandalay Bay mass shooting in October and felt strongly about doing something to help out his hometown in its time of need.

With the PGA Tour in Vegas last week, Hoffman found the perfect opportunity and announced he would donate all of his winnings at the Shriners Hospitals for Children Open to a fund set up for victims of the shooting. 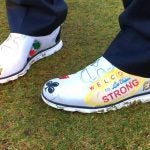 As Hoffman told Golf Channel after his final round, “With the stories I’ve heard this week, there are a lot of people hurting in this city. I just hope to be able to give back hopefully a good check and hopefully do some good.”