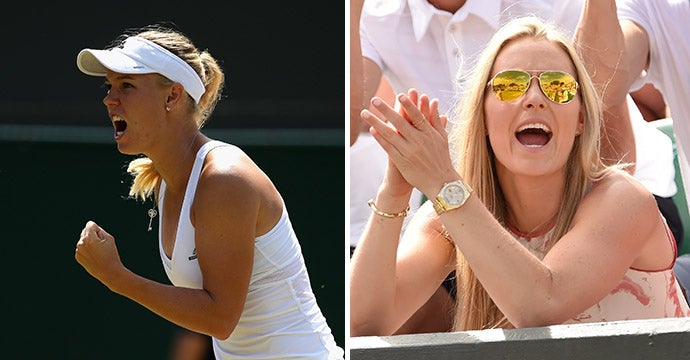 Caroline Wozniacki during her third round match at Wimbledon; Lindsey Vonn takes in Day 7 action at Wimbledon.
Getty Images

Despite both being professional athletes, who just happen to be women that are no longer dating professional golfers, Caroline Wozniacki and Lindsey Vonn are still being asked questions about their famous Tour exes.

This week at Wimbledon, Wozniacki spoke to the press following a straight-sets loss to Garbine Muguruza, where she was asked about Rory McIlroy’s ankle injury. On Monday, the world number one posted an Instagram photo sporting a medical support, explaining that he had ruptured a ligament in his left ankle while playing soccer with friends.

To her credit, Wozniacki didn’t answer the question, choosing instead to focus on questions about her own tournament and exit from the prestigious Grand Slam.

Vonn, who took in both Wozniacki’s and Roger Federer’s matches, threw the media a bit of a bigger bone than Wozniacki when she was asked about ex Tiger Woods.

USA TODAY Sports asked the world champion skier about her friendship with Wozniacki, her love of tennis and her Wimbledon predictions before bringing up hers and Woods’ May breakup.

“I’m doing really well. I’m feeling good,” Vonn said. “I have a good support system around me and we ended on good terms. It just didn’t work.” She said the two do keep in touch.

Vonn and Woods mutually ended their relationship in May citing busy schedules and time contraints, while Wozniacki and McIlroy broke off their engagement in May 2014.