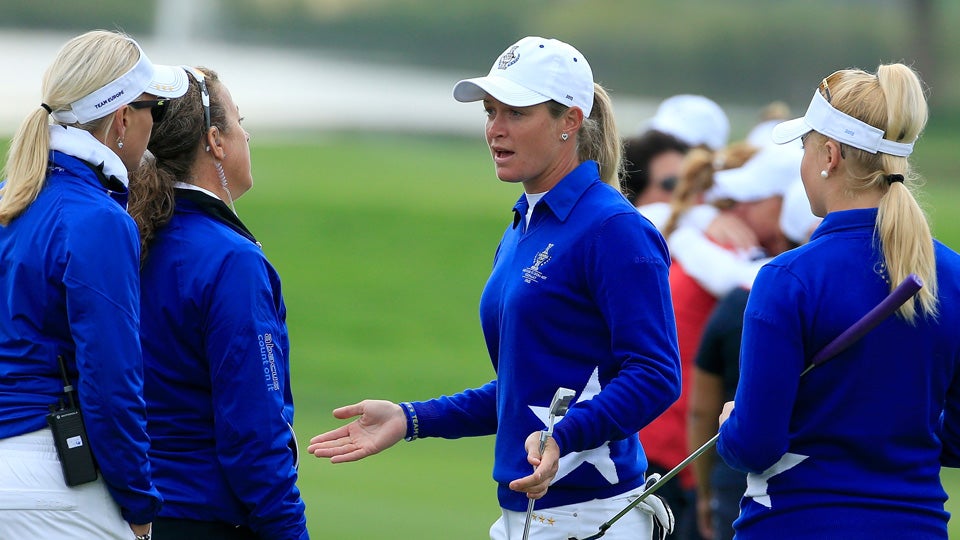 Suzann Pettersen of the European team tries to explain to her captain Carin Koch the length of putt that she did not concede to Alison Lee on the 17th green during the 2015 Solheim Cup.
David Cannon/Getty Images

When Phil Mickelson openly challenged U.S. Ryder Cup captain Tom Watson at Gleneagles, he was applauded and handed a seat on the newly formed Ryder Cup task force. When Suzann Pettersen challenged her Solheim Cup competitor’s adherence to the rules at St. Leon-Rot, she was roundly criticized for being too aggressive.

Both acted on their competitive instincts, so what gives? Butch Harmon, Pettersen’s swing coach, thinks he has the answer.

“Absolutely, there’s a double standard,” Harmon told the New York Times. “It’s not right. One of the things I love about Suzann is what a great competitor she is. She prepares, and she plays, to win.”

During a Sunday fourball match, Alison Lee missed a birdie putt that would have won the hole for the Americans. The ball was two feet from the hole, so Lee picked it up, assuming Pettersen had conceded the par putt and the halve. Lee claimed to have heard the putt was “good,” but Pettersen said she had made no such concession. The Europeans were awarded a full point and would go on to win the match, but not the event, as the U.S. staged a dramatic comeback fueled — so the story goes — by their anger over Pettersen’s supposed lack of sportsmanship.

Pettersen apologized the following day, and both she and Lee have since said they have moved on and harbor no ill feelings toward each other.

“I don’t think I would have done anything differently,” Lee said. “For me, it’s not that I feel bad for what I did. I just feel bad that everyone kind of pointed the finger at Suzann.”

As Harmon pointed out, Pettersen isn’t the only female athlete to face criticism for displaying intensity and gamesmanship in sport.

Mickelson was just as outspoken at the Presidents Cup after being penalized for switching balls in middle of his match against Jason Day and Adam Scott. He and playing partner Zach Johnson went on to halve their match with the Aussies, prompting this zinger from Lefty: “I think we spotted the Internationals’ best team two holes, and they still couldn’t beat us. Just saying.”

Pettersen, however, was forced to apologize for a rules gaffe she didn’t even commit and rationalize that maybe the situation could have been handled differently.

“To be a female athlete is to be ever mindful that appearances matter. Prettiness is next to godliness, which is why many of the players wear makeup during tournaments and treat their competitiveness as an imperfection that needs to be covered up with hugs and smiles. The same icy stare that identifies Tiger Woods as a fierce competitor is off-putting when it freezes Pettersen’s opponents.”