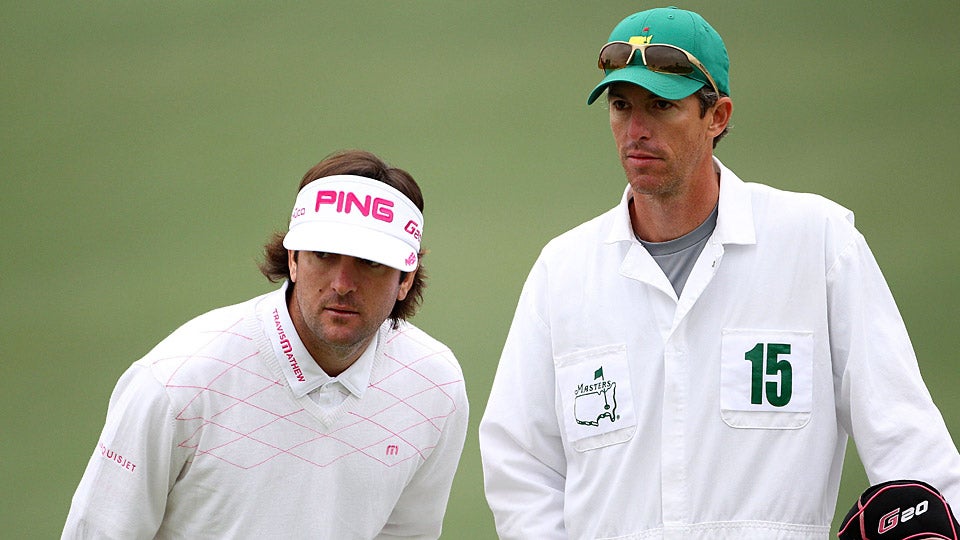 Bubba Watson with his caddie Ted Scott at the Masters.
Jamie Squire/Getty Images

A Tour caddie for 15 years and himself a scratch golfer, Ted Scott is hard to impress. So it speaks to Bubba Watson’s sublime shotmaking skills that the two-time Masters winner regularly makes his longtime looper’s jaw drop. Scott counts down the five most amazing Masters shots Bubba ever hit — and No. 1 isn’t what you think!

“Last year everybody freaked out about this [choked-down 6-iron second] shot through trees and over water. The hard thing was hitting it far enough to carry the water. TV made it look super scary, but we had an angle to the trees to where even I could have hit it through. Could I have hit it over the pond? Doubtful. Bubba’s distance control — to hit a cut that starts low and lands on the back of the green, down the stretch on Sunday — was impressive. He made par, which is all you need with a three-stroke lead.”

“Bubba’s tee shot ended up in the right rough. The pin was in that front-right bowl. Trees were in the way, so he couldn’t hit a big ol’ hook to get it on the green. I encouraged him to hit a low shot into the front bunker. He said, ‘What about that gap there?’ I look up at a 10-foot-wide circle way up in the   trees about 50 yards away. Now, the farther away the   gap, the smaller the target. And hitting it though there   had him aiming right of the green, so if we don’t cut it, we’ve got nothing for the   third shot. But I don’t argue with Bubba if he’s confident — it’s like telling Picasso he can’t paint a painting. He hit a 9-iron cut shot through the gap to about six feet from the pin, straight up the hill. Skillwise, it was amazing.”

“Coming off four straight birdies and tied with [playing partner] Louis Oosthuizen, Bubba drove it left of the trees. The lie was sandy and really thin. He had about 140 yards and chose a sand wedge. To get over the trees and to that back-right pin, you had to get it in the air fast. Bubba left the face open through contact to make sure he got the ball up, and he hit it pin-high, back-left. To get that kind of power and height off a thin lie, well, he could have easily thinned it into the trees or chunked it. Bubba then two-putted to save a critical par.”

“This is the famous wedge from the trees [right on] No. 10. [Watson would par the playoff hole to win his first green jacket.] It’s actually the easiest of Bubba’s great Masters shots. Now, give me 100 shots from there, and I couldn’t hit the green, but for Bubba, it wasn’t that hard.

He had a firm lie, ball above his feet, and he had an opening. He just had to hit it hard and hook it, but doing it in a playoff and winning makes it more special. I equate this shot to Tiger making that six-footer on No. 18 to get into a playoff with Bob May at Valhalla [in the 2000 PGA Championship]. It was the high-pressure circumstances, more than the pure skill, that made it amazing.”

“This is the greatest — and stupidest — shot I’ve ever seen Bubba hit. After making bogey on 10, he hits his tee shot on 11 into the trees right, and pretty far. Now, the pin was about 18 yards on and in the center — easy to access, but his lie was terrible. The ball was sitting down in the pine straw, like an egg in a bird’s nest. About 15 feet high there was a 10-foot-wide window to work with. It’s very hard to hit it low from that nestled lie, and he had to aim at the scoreboard left of the water.

“I said, ‘Punch it out, and you’ll have the easiest wedge pin position on the course.’ He said, ‘But I’m known for hooking it.’ I just couldn’t compute that a person could hook it out of this lie. Plus, we’d be starting the ball at the scoreboard left, so we’ve got to hit it low and hook it enough to avoid the water. I was, like, ‘What are you thinking?’ Bubba said, ‘Look, I got this. Back up.’

“I’m thinking, ‘There’s no chance — this is going in the water. We’re looking at double-bogey, at best.” Then Bubba hits it and over-hooks it! It catches the slope short-right in front of the green, runs off the mound, and trickles onto the center of the green, about 50 feet from the pin, where he two-putts for par.

“To this day, I can’t wrap my mind around it. For him to even see that shot as an option…my last thought was, ‘What kind of a freak are you?'”