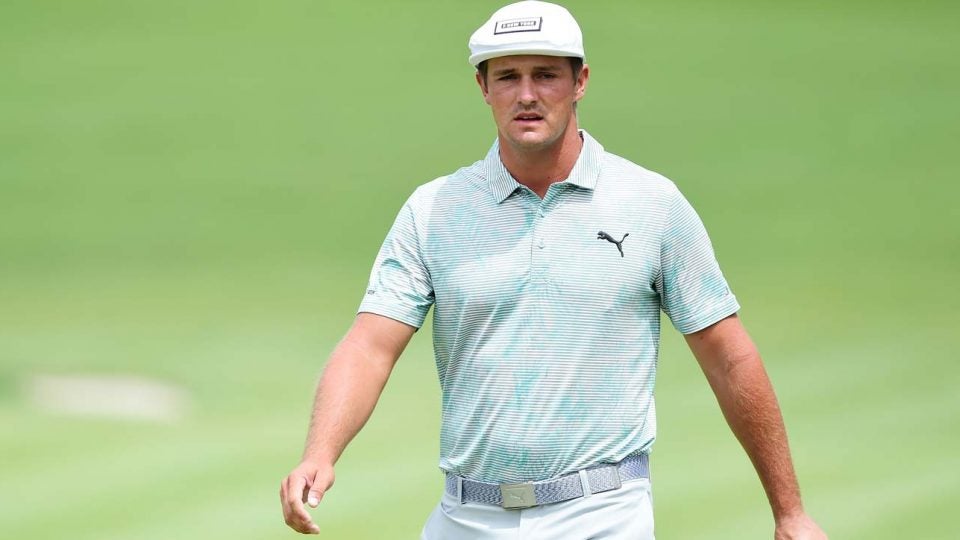 Early on Saturday, the talk of the tournament at the Northern Trust was all about Bryson DeChambeau and slow play (at least on the internet). On Saturday evening, DeChambeau gave a passionate defense of himself at Liberty National.

DeChambeau was roundly criticized for slow play in the second round. Critics included a bevy of PGA Tour pros, TV announcers, and lots of golf fans on Twitter. Two incidents in particular from Friday’s round became the center of attention when videos were shared on Twitter.

Among the more vocal and forceful critics was pro golfer Eddie Pepperell, who responded to one of the videos by calling DeChambeau an “unaffected single minded twit” who “doesn’t care much for others.”

After finishing off an even-par 71 in the third round on Saturday, DeChambeau met with reporters and the slow play debate was fresh on his mind. Before any questions could be asked, he said, “Let’s talk about slow play, guys,” and then began a lengthy off-the-cuff statement about the situation. And he didn’t hold back.

“It’s really kind of unfortunate the way it’s perceived because there’s a lot of other guys that take a lot of time,” DeChambeau said. “They don’t talk about this matter and for me personally, it is an attack and it is something that is not me whatsoever. People don’t realize the harm that they are doing to the individuals.”

“Let me give you one example, guys. Stevie Williams. I played with him at the WGC, right. Guess how long it took us to play that round, the third round? Does anyone know?” DeChambeau asked. “Might want to go check that out. Because we were on their tail every single hole playing with Jason Day and Stevie. A lot of it’s the caddies.”

He continued trying to make his point, saying that while he loves competition more than anything else, “when people start talking to me about slow play and how I’m killing the game, I’m doing this and that to the game, that is complete and utter you-know-what. That’s not fair.”

In the course of the press conference, DeChambeau directly addressed his feelings about Pepperell’s comments, saying, “I would love to speak to him personally and talk about it, because I played with him, actually, at WGC-Mexico. We can talk about that time that we played it in.”

Pepperell was only one of many pro golfers who chimed in with their own critiques of DeChambeau and the problem of slow play in general. Veteran Lee Westwood tweeted that “slow play is killing the game of golf” and that “the players that are pathetically slow should just have more respect for their playing partners. And get on with it!”

Slow play is “slowly “ ruining the game of golf. It’s time the people that can do something, did something. Having said that , the players that are pathetically slow should just have more respect for their playing partners. And get on with it!

Ricky Barnes posted one of the videos of DeChambeau and wrote, “He needs to watch this after and see if it’s ok.” That inspired a response from Canadian pro Graham DeLaet, who wrote, “That is not okay @b_dechambeau. What in good hell was that?”

No kidding. That is not okay @b_dechambeau. What in good hell was that?

Roberto Castro chimed in with his own take, referring to jokes about DeChambeau’s pace and process that TV announcers made on-air in one of the videos.

All the “physicist” and “his caddy needs to be an aerospace engineer” stuff is an insult to actual physicists and aerospace engineers. They can do actual math and engineering, anyone with two eyes and/or two feet can read an 8-footer.

Luke Donald and 2002 PGA Champion Rich Beem took a slightly different route with their own tweets, demanding that real action be taken by the PGA Tour to combat the slow play epidemic in the game.

THIS HAS GOT TO STOP!!!!! @PGATOUR if you don’t do something about this, SHAME ON YOU!!! As a member, I’m OUTRAGED you can tolerate this. You talk about “protecting the field”, then protect it by penalizing/DQing this type of behavior!! ENOUGH!!!

Slow play in golf isn’t anything new - but nowadays with social media, TV etc it’s just being exposed to a new level. This seems like the perfect time to do something about it! C’mon people it’s 2019, let’s figure this out!! @PGATOUR @EuropeanTour @RandA @USGA

It’s safe to say that this is not the last we will hear from DeChambeau and other PGA Tour pros about slow play on Tour. While complaints about slow play are not new, the fact that pros are now publicly pleading for change on a regular basis means the Tour has no choice but to address it, one way or another.