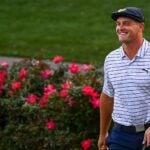 Bryson DeChambeau is the first golfer to launch his own non-fungible token, or NFT.

The next frontier for Bryson DeChambeau?

On Monday, DeChambeau announced that his likeness will appear on a set of limited-edition digital trading cards known as non-fungible tokens, or NFTs, a cryptocurrency powered by blockchain technology. NFTs have exploded in popularity among investors and sports fans in recent months.

In the case of trading card NFTs, fans bid for the right to own a unique digital highlight, which can then be held or sold on the secondary market. Each NFT holds its own unique value.

To date, the best-known NFT is NBA Top Shot, a platform of online trading cards licensed by the NBA. Top Shot has earned a cult-like following among basketball fans and memorabilia collectors, grossing more than $400 million in sales, with some individual card packs selling for more than $250,000.

DeChambeau is the first professional golfer to release his own limited-edition NFT.

“Bryson is a trailblazer in every sense of the word,” Brett Falkoff, Bryson DeChambeau’s agent, told GOLF.com. “We are thrilled that Bryson will be the first professional golfer to have his own NFT. Bryson is always looking at new and ways to innovate and grow the game of golf. We believe this is a unique opportunity for Bryson to continue to stay ahead of the curve”.

DeChambeau’s NFT will offer five unique versions of digital trading cards. The Distance card, of which there is only one, figures to hold the highest value; it comes with a meet-and-greet with Bryson at a U.S. golf event, an autographed U.S. Open flag, a custom set of Cobra golf clubs, a $1,000 Bose gift card and six dozen Bridgestone balls. The remaining four cards — named “American Champion,” “Swing,” “Red” and “White” — will each have 18 editions and will be auctioned individually.

While Bryson is the first pro golfer to have an NFT, it’s unlikely that he’ll be the last. Digital trading cards appear to have created a market for athletes to sell and trade their own NFTs to fans and memorabilia collectors alike. Top Shot regularly sees queues of tens — and sometimes hundreds — of thousands of fans eagerly awaiting the opportunity to buy their own packs. Other major sports leagues have also taken notice, including the NFL, MLB and Formula 1, which have begun investigating and founding their own NFTs.

Perhaps the best comparison for DeChambeau in the crypto world is Tampa Bay Buccaneers tight end Rob Gronkowski. Gronk was among the first professional athletes to create his own digital trading cards, and his “Championship Series NFTs” fetch in the neighborhood of $5,000-$50,000 per card.

Bryson’s NFTs will become available for auction on OpenSea — the world’s largest NFT marketplace — on Monday at 4 p.m. ET. Fans will have 30 hours to bid on each of DeChambeau’s 73 total digital cards, with each auction closing on Tuesday, March 23rd at 10 p.m. ET. At that point, the highest bidder will be awarded each card.