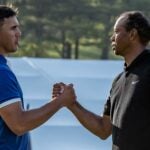 Brooks Koepka and Tiger Woods during the 2019 PGA Championship.

Brooks Koepka swung, and his ball worked right to left on the 15th at the Albany Golf Course. “Nice swing, dude,” Chase Koepka, his younger brother and caddie, said. It was. And it was. Koepka’s second shot on the par-5 during Friday’s second round of the Hero World Challenge dropped about 15 feet from the cup.

The draw also flew through his upper-left window.

You, Brooks Koepka fan, see his scores, and you see that his game is trending back up. A pair of 67s during the first two rounds of the Hero, which place him a shot out of the lead heading into the weekend. A convincing match-play win over the Hero’s leader, and Koepka frienemy, Bryson DeChambeau, at the Match last Friday. And while Koepka no doubt sees the scores, too, he knows he’s running best when he’s also seeing something else.

“I always picture when I’m hitting the golf ball I’ve got nine windows in front of me,” he said Friday. “When you’re trying to hit the low, stinging draw, you go to the bottom right or whatever. I always feel like I’m kind of hitting the upper left-hand corner, and I’m finally starting to do that, and it’s matching up to what I’m feeling.

“That’s been the big thing, I think, is matching the feels. OK, I felt like I missed it right at impact, it’s missing right, or if I’m missing left, I feel that at impact. So I’m very happy with the direction we’re going.”

If you think you’ve heard of the nine-windows trick before, maybe from the man who’s hitting 3-woods off to the side this week at the Albany Golf Course, it’s because you have. Yes, Tiger Woods, among others, also employs it, and the rehabbing 15-time major champ went in depth on it earlier this year on a pre-accident video for TaylorMade.

“It’s basically three different trajectories — high, medium, low — and from there, it’s about whether you cut them or draw them,” Woods said on the video. “Those are your nine windows.”

“When I get into a tournament situation, under the gun, I don’t think of anything but that [the nine windows],” Woods said later in the video. “Now, do I do a hell of a lot of position work? Yes, in front of a mirror or on the range. But if I have to hit a shot now, to play this shot in a tournament — we’re on a range, but I’m imagining that I’m on a golf course; how I talked you through that little cut, where I need that ball to start off at that little ball and ended at the tree — that’s all how I’m looking at this golf shot and feeling it.”

Before Koepka’s recent run, he had been in a slog. Back-to-back missed cuts. Before that, a finish of no better than a tie for 22nd in six events since the Open Championship in July. The video shared by the PGA Tour of Koepka hitting driver after driver after driver on the range after the first round of Houston Open early last month was telling.

Somewhere along the way, various injuries had forced the four-time major champion into compensating. And now, he was paying for it.

“Yeah, day by day, it’s always getting a little bit better, where it feels kind of back to, I wouldn’t say normal yet, but it’s getting there,” Koepka said. “A lot of it was just the little idiosyncrasies that your body just makes up for trying to not — I was never trying to stay off my right leg, but it just kind of naturally happens. I notice it even when I’m standing certain ways — I kind of stand on my left leg a little bit more. So things like that.

“My stance was the big thing — it got so wide. Jeff Pierce, my putting coach, and my brother were looking at a side-by-side on, I think, Tuesday night, and my feet were about a foot wider than where they are now. So I just feel I narrow the stance, I’ve got more control — my body’s not sliding back on my right foot so I don’t have to push off. It’s been a lot more consistent.”

Just how consistent? Consider this exchange at the end of Koepka’s press conference on Friday: