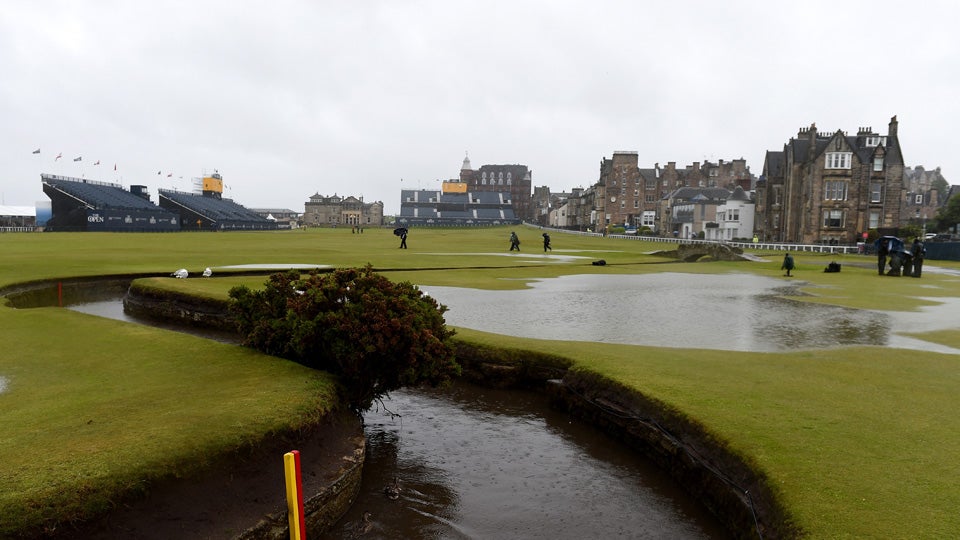 The second round was delayed 3 hours, 14 minutes with just two groups on the course. There was standing water in bunkers and ankle-deep water in some fairways. The final group of the day now won’t tee off until 7:27 p.m. local time. Play will likely continue until around 10 p.m., but there is no chance the second round will be completed.

That makes for a long day for the leader, Dustin Johnson, who now kicks off his round in the company of Jordan Spieth at 5:48 p.m. local time (12:58 p.m. EST) and won’t finish until Saturday morning.

Phil Mickelson was scheduled to play at 4:33 a.m. EST but was delayed until 7:47 a.m. EST. Tom Watson, who is likely playing in his final British Open, may have his career here extended by a day. He tees off at 11:48 a.m. EST and also may not finish Friday. That would delay what should be an emotional sendoff for the five-time champion, who is in danger of missing the cut after an opening-round 76. Tiger Woods also shot a 76 on Thursday and tees off at 1:10 p.m. EST.

The weather forecast isn’t getting any more promising. The rain ought to hold off for a few hours this afternoon, but blustery showers are possible later. But even if the rain stays away, the wind won’t. The Old Course is supposed to be raked by strong gusts Friday and Saturday, reaching over 30 mph this afternoon.