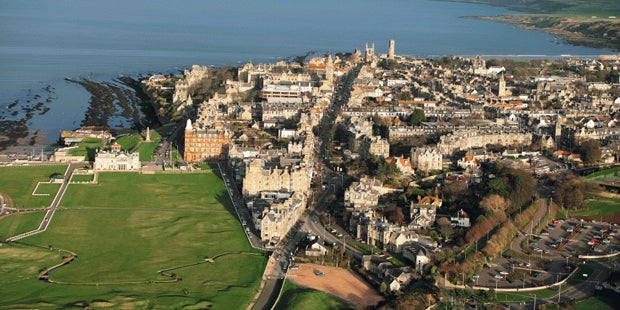 My overnight flight arrived in Glasgow at 7:30 this morning and Siri told me that I’d arrive in St. Andrews around 10 a.m., and I thought I might be able to slip into Tiger’s press conference, set for that hour. But the Hertz counter, the M-90, Junction 8 and the A-917 had other plans. Instead, I had a late breakfast with some friends at a place in town called Forgan’s, named for a 19th century club manufacturer. Years ago, a Scottish teaching pro named John Stark gave me a club stamped with the name R. Forgan. That’s one club I’m not selling at the yard sale we’re never likely to have.

I’m renting a room in a private home in the heart of town, maybe a half-mile from the Old Course. I was in the same house, with the same golf-bum friends, in 2010 and in 2005. Not much changes here, and who would want it any other way? My friend Bert and I are having a competition, to see who can end the most sentences with the word indeed. I’m going to give Bert a break and not count that one.

You might have going to the Masters on your bucket list, and you should, but I’d put an Open at St. Andrews ahead of it. For one thing, there are 20 or 30 courses within 20 miles of the Old Course that you’d love to play, and you have the daylight you need to both watch the golf and play the golf, too. As for the charms of St. Andrews, they are endless.

On a longish and slow jog this afternoon, I went up a hill and straight out of town. From on high, everything looks small and insingicant, which of course it is. The farm fields often have ancient rights of ways running right through them. The Scottish sense of property is very different from what we have in the United States. One road I was on today devolved to a narrow path and then an overgrown farm field in the space of a mile or two. I’m still picking thorny things out of my socks and running shoes.

At half-past seven, with at least two hours of daylight left, I found myself walking all over the Old Course. Nobody was chasing me away and there were many others golf buffs doing the same thing. I know Tiger’s been talking about how soft the course is but it seemed plenty firm to me. It was green, from all the rain that has fallen here in recent weeks, but the ground was hard. Michael Greller, Jordan Spieth’s caddie, was on the course, getting yardages. He bowled one from about 60 yards in front of the 17th green and it showed no signs of slowing down when it hit the green. Very fast indeed.

Carl Smith, Cameron Tringale’s caddie, was out there on the course with Greller. Carl has a handlebar mustache he seemingly borrowed from an American League pitcher, circa 1920. I’m not saying his ‘stache is going to make you forget about Young Tom Morris’s tea strainer, but it’s impressive. If you’re in St. Andrews, and you care about golf, you actually feel connected to the Tom Morrises, senior and junior.

That’s not chamber-of-commerce prattle. I’m telling you what I actually feel when I’m in St. Andrews. You are aware of the golfers and duffers and feather-boilers (to make gutta percha balls) that came before us. That’s why it does not matter if the winning score is 16 under again, as it was the last St. Andrews Open, in 2010. You come here because we have always come here.

It’s strange, when you get out of town two or three miles. When you’re up high at that point, looking down, and you can see the farm fields and the town and the church spires and the sea, but you can’t see the Old Course, or the New Course either, for that matter. True linksland is flat, sullen, hidden. The Old Course is just a rumpled field, mown tight, with a burn running through it and 18 holes and 36 tee markers. Golf is a simple, cross-country, outdoor ball-and-stick game. Everything else you’ve heard about it is marketing, and commentary.