Brian Harman Leads Bubba Watson By One at Travelers Championship 2015 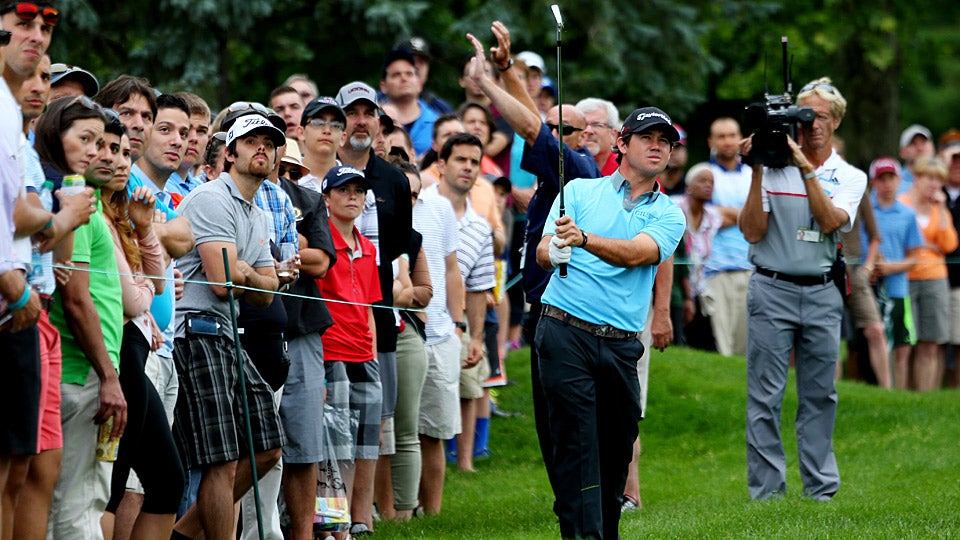 Brian Harman during the third round of the Travelers Championship.
Getty Images

CROMWELL, Conn. (AP) — Brian Harman has always looked up to Bubba Watson, who preceded him as a standout left-hander for the University of Georgia Bulldogs.

On Sunday, Watson will begin the day looking up the leaderboard at Harmon as the two begin play in the final round of the Travelers Championship.

Harman birdied the 18th hole for his second consecutive 5-under 65 and a one-stroke lead over Watson and Canadian Graham DeLaet on Saturday in the Travelers Championship.

Looking for his second PGA Tour victory, Harman had a bogey-free round to take a 14-under 196 total into the final round at TPC River Highlands.

Harman hit a 149-yard wedge to 4 feet on the par-4 18th. He sank the putt after Watson, who led by two strokes after the each of the first two rounds, missed a 17-footer.

”Bubba’s a lot of fun to play golf with,” Harman said. ”He was a little before me at Georgia, so I always looked up to him, was always really proud of the way he was doing and we were always rooting for him at Georgia.”

This is the second 54-hole lead for Harmon, who won the 2014 John Deere Classic from the front on the final day.

”He’s a solid player,” Watson said. ”It sounds funny saying this, but he’s like a little bulldog.”

Watson shot a 68 in a light rain after opening with a tournament-best 62 on Thursday and adding a 67 in the second round.

He needed a bit of luck Saturday after his tee shot on the par-4 15th hole went left and into the woods. He got a fortuitous bounce high off a tree trunk and the ball dropped back over the gallery and into the fairway bunker. He was able to save par from there.

”It hit the tree and everybody roared,” he said. ”I had to ask the camera guy, and he said it was in the bunker.”

DeLaet, playing on wife Ruby’s birthday, had five birdies and grabbed a share of the lead with an eagle on the 15th, putting his drive within 6 feet of the pin.

DeLaet was in a three-way tie for first place with Watson entering the final round two years ago before finishing third. He has never won on the PGA Tour, and had back surgery for a pinched nerve in 2011, a problem that he says still bothers him.

”The last couple months I’ve been moving really well and feeling a lot better,” He said. ”My golf game is coming around too, which is nice.”

He and his wife also are expecting their first children, twins, in December.

Brandt Snedeker, Paul Casey and Zach Johnson were 11 under. Snedeker had a 63 to match the best round of the day, and Casey and Johnson shot 64.

Snedeker’s round began with a par before reeling off three straight birdies and then chipping in from a green-side bunker on the par-3 eighth.

He finished before the rain picked up with three more birdies on the final six holes. He almost holed out on the par-4 17th, hitting his second shot across the course’s signature lake where it rolled back within a foot.

”It was absolutely perfect,” he said. ”It came off exactly how I was looking and almost went in. That’s a tough hole, so to steal one there gave me some good thoughts coming into tomorrow.”

He finished a stroke ahead of Chris Stroud, who shot a 68. Seven players were tied for eighth, including former Stanford star Patrick Rodgers.

Rodgers, who was in the first pair of the day after just making the cut Friday, also shot 63 with a career-best round that included seven birdies Saturday including five on the back nine, and two in row to finish.

”As much as I don’t like making the cut on the number, I really like playing the first golf,” he said. ”The greens were perfect. It was really, really great conditions for scoring this morning.”

Rodgers, who won 11 tournaments at Stanford to tie Tiger Woods’ school record, played his first tour event here as an amateur in 2012, then made his professional debut at the Travelers a year ago.

”There’s really not too many venues where I show up and I feel like I know what I’m doing,” he said. ”So, it’s really nice to be back here.”

Sergio Garcia also was in that group at 9 under after shooting a 66. He had a chance to go lower, but put a tee shot in the water at 13 and ended up shooting a seven on the par-5 hole.

With a storm moving into to Connecticut, officials said Sunday’s round will be played in threesomes, going off the first and 10th tees beginning at 11:30 a.m.

”I’ve never played particularly well in the rain,” Harman said. But I try to look at today and we got a break. The weather was not as bad as I thought it was going to be.”

This story has been corrected to fix the spelling of Harman