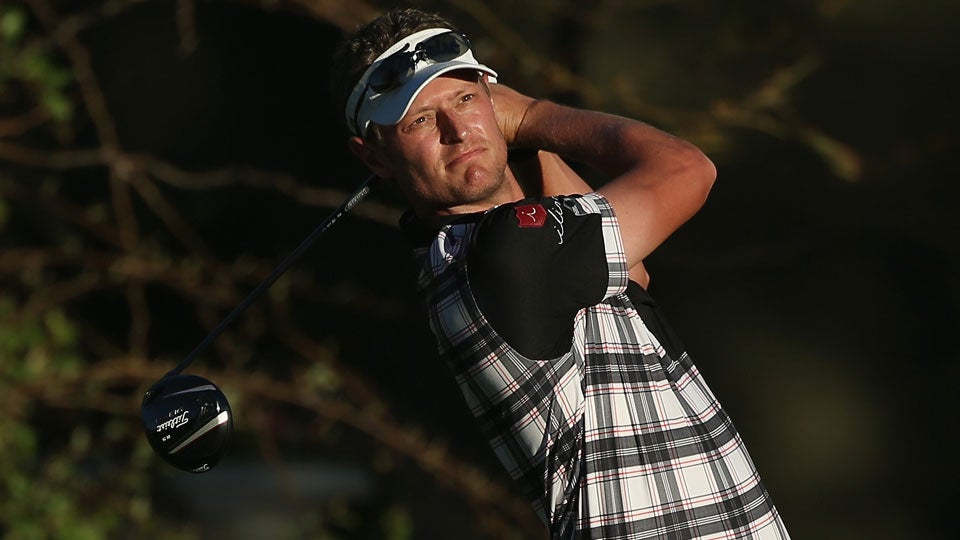 Brett Stegmaier tees off on the third hole during the second round of the 2015 Shriners Hospitals for Children Open.
Getty Images

LAS VEGAS (AP) — Brett Stegmaier topped the leaderboard Friday in the Shriners Hospitals for Children Open in only his fifth career start on the PGA Tour.

The 32-year-old former University of Florida player was 6 under for the round and 11 under overall with three holes left when second-round play was suspended because of darkness. He will resume play Saturday morning with a 14-foot birdie putt on the par-4 seventh.

“It was kind of downhill and the greens were bumpy,” Stegmaier said. “They’ll be better in the morning. It was a no-brainer.”

Stegmaier eagled the par-5 16th on his opening nine and had four birdies on the 15 holes he was able to finish at TPC Summerlin. He earned a tour card in the Web.com Tour Finals series.

“A month ago I wasn’t even guaranteed Web.com status for next year,” Stegmaier said. “Just kind of turned it on at the end of the year, figured a couple things out.” 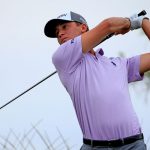 Former UNLV player Chad Campbell was a stroke back along with Morgan Hoffmann and Tyler Aldridge. The 41-year-old Campbell had a 4-under 67. He won the last of his four PGA Tour titles in 2007.

Aldridge birdied three of the last four holes, hitting a 134-yard shot to inches on the par-4 18th.

Arriving at the course at 5:30 a.m., the Web.com Tour graduate completed a 64 in the morning for a share of the first-round lead.

“I’m tired,” Aldridge said. “I’m going to go home, get some rest, and be ready for tomorrow.”

“The greens got kind of firm. They got bumpy, too,” Hoffmann said. “But the fairways are great and the greens will roll true in the morning, so looking forward to the morning.”

U.S. Presidents Cup player Jimmy Walker topped the group at 9 under after a 67.

“I like the golf course. I like the town and the weather is great,” Walker said. “I have just fun memories of the place. It’s nice to have a place that you enjoy showing up to and look forward to playing more golf.”

Mark Hubbard was 9 under with two holes left. He got into the field as an alternate when Matt Every withdrew.

“I started to play a little bit more aggressive, tried to kind of get after some pins and give myself some chances at birdies,” Fowler said. “Been swinging all right, didn’t hit the center of the face a whole lot yesterday. I started to get a little bit of that on the front nine today and made a couple good swings, 10, 11, got things going, made a few putts, and finally got a few things going my way. Nice to have a tee time tomorrow.”

Defending champion Ben Martin was 4 under after a 68.

Argentina’s Emiliano Grillo, a playoff winner Sunday in the season-opening Frys.com Open in Napa, California, missed the cut with rounds of 74 and 70.