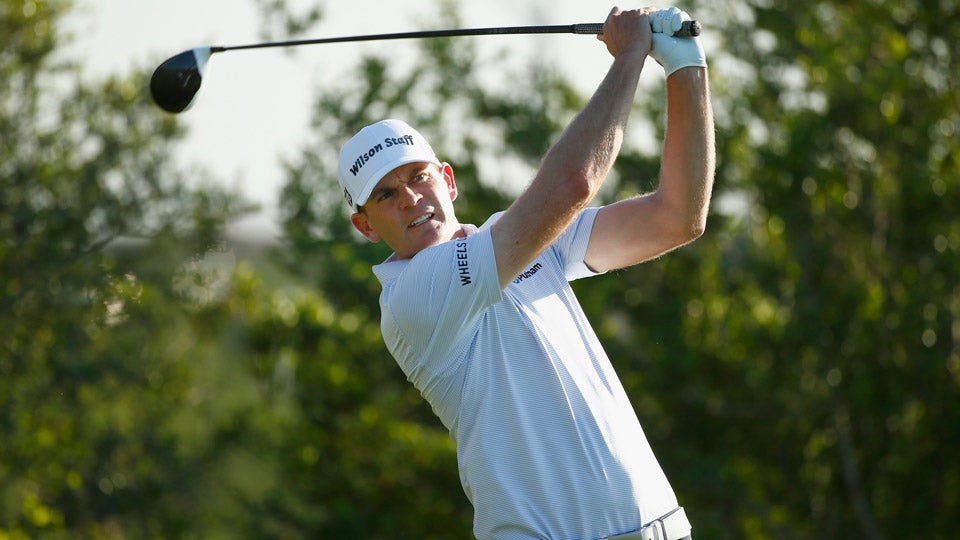 Brendan Steele during the first round of the 2016 Valero Texas Open.
Getty Images

SAN ANTONIO (AP) — Brendan Steele got his only PGA Tour victory at the Texas Open five years ago. He was chasing a record when the first round of this year’s stop near the Alamo was suspended because of darkness.

Steele was atop the leaderboard at 8 under through 13 holes Thursday when play was stopped. Only half of the field completed the round after play was delayed for 3 1/2 hours because of morning rain.

Among those who did finish, Charley Hoffman had a 6-under 66, a stroke ahead of Stuart Appleby and Peter Malnati. Appleby ended his round with five consecutive birdies.

“I can’t figure the last time I probably had two, three birdies in a row. Five was a great finish,” said Appleby, without a top-10 finish his 10 previous starts this season. After playing bogey-free Thursday, Steele will return Friday morning to complete his first round at the TPC Oaks Course within reach of the course record of 63 set by Matt Every in 2012 and matched by Martin Laird in 2013. Steele could match that by going 1 under his final five holes.

Defending champion Jimmy Walker opened with a 75. Walker had four rounds under par last year in his hometown event to hold off Jordan Spieth in what was his last PGA Tour victory.

Spieth isn’t in this year’s field, the first time since he turned pro at the end of 2012 that he missed a Texas event.

Steele, who started his round on the back nine, had birdies on his first three holes and four of the first five. After a 12-foot birdie at No. 18, he made the turn with three consecutive birdies to start the front nine.

But he was among the players with afternoon tee times who will have to finish their first rounds Friday, then turn around in short time to play their second rounds. Every afternoon group Thursday got through at least eight holes, but none finished.

Hoffman’s only bogey came when he missed the fairway at the 17th hole, but he rebounded to finish with an 11-foot birdie putt at No. 18.

“One of the toughest flags on the golf course. Hard to get one close. Not a lot of green where that pin is, obviously, and no matter what you do ending your round with a birdie is always great,” said Hoffman, who needed only 26 putts in the round. “Bounce back after a bogey on 17 and I’m happy with 6-under.”

Malnati turned in the shot of the day at the 347-yard 17th when his 94-yard approach shot hit on the green and spun sideways into the hole.

“That was cool,” said Malnati, who was in the fairway and signaling to someone at the green to confirm if the ball went into the cup.

After missing cuts in his last seven starts, and nine of his last 10, Malnati had his best round since a 67 at the Sony Open in Hawaii more than three months ago. He got his only career victory at the Sanderson Farms Championship in Mississippi last November. The 28-year-old is in his first full season on the PGA Tour.

“It’s important for me to remember it’s a long season and I’m going to have, hopefully, a very long career,” he said. “So this little stretch the last seven weeks stinks. It’s no fun. If I keep kind of a big picture it helps me a little bit. I felt it was coming around. It has been a tough seven weeks.”