Brandel Chamblee is not happy about the way the anchoring ban is being upheld on the PGA Tour.

In a series of tweets on Saturday night, the Golf Channel analyst criticized the enforcement of the rule, calling it “appalling” and stating that it exhibits “gross disregard for the spirit of the game.”

It all started when a Twitter user commented on one of Chamblee’s tweets dated May 31, in which he posted a picture demonstrating how to use a long putter without anchoring.

This is what nonanchoring is meant to look like. If I wanted to putt with a long putter and remove all doubt, I’d follow suit pic.twitter.com/5ltItb0zuo

The commenter suggested that anchoring issues would be moot if the putter’s length was maxed out at one meter.

With regard to the anchoring ban on the PGA Tour Champions,it’s appalling,I have never seen such gross disregard for the spirit of the game.

Interestingly, Chamblee claims that he was not in favor of the ban originally, but now takes issue with the rule’s enforcement.

I didn’t agree with the ban, because bifurcation was necessary, but post ban, I’m disgusted with the application. Intent?!! #rulesbeingbent https://t.co/Mm4Tc94jGY

While Twitter commenters speculated that Chamblee was referring to Bernhard Langer, Chamblee did not specifically mention any player by name. 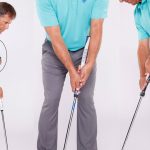 You may also like 3 Ways to Beat the Anchor Ban