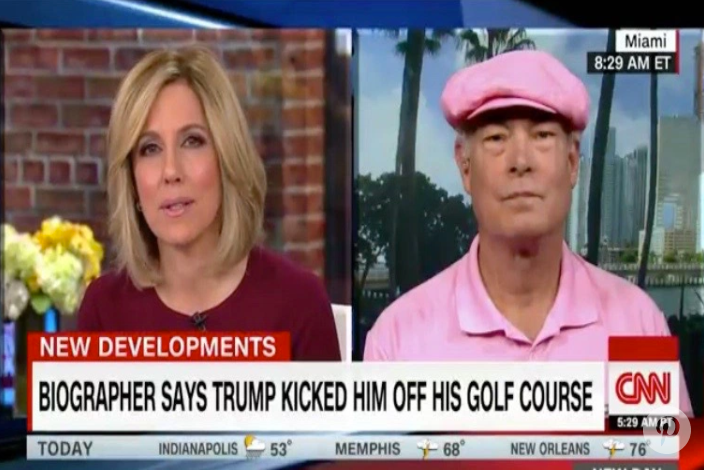 This story originally appeared on People.com.

Harry Hurt III, author of an unvarnished 1993 biography of Donald Trump, says the now-president-elect booted him from the Trump International golf course after calling the biographer’s presence there “inappropriate.”

In a post on Hurt’s Facebook page over the holiday weekend, the biographer, whose book Lost Tycoon: The Many Lives of Donald J. Trump has been out of print for years, described the episode in the third person. Hurt says he went to the Trump-owned golf club near West Palm Beach, Fla., on Friday to play with club member David H. Koch and two other men.

“Hurt, who has a scratch handicap and plays in colorful knickers, walked over to Trump on the practice range prior to his group’s assigned tee time, only to suffer a tongue lashing from the president-elect, the post read. Hurt says he told Trump, “Congratulations, sir” and shook his hand.

Hurt recalls. “Trump said, ‘You were rough on me, Harry. Really rough. That s— you wrote.'” Hurt says he looked Trump in the eye, and said, “It’s all true,” to which Trump rejoined, “Not in the way you wrote it.” At that point, Hurt alleges, Trump “had his security detail escort Hurt, Koch, and their playing partners to the parking lot.”

“David [Koch] was appalled,” says Hurt in the post. “He branded Trump ‘petty’ and ‘vulgar.'”

Proving he still knows how to get under Trump’s competitive skin, Hurt added: “We played Emerald Dunes instead, which is a much, much better golf course than Trump International.”

Appearing on CNN on Monday, Hurt elaborated on the encounter, saying Trump was on a practice range when Hurt approached him “out of courtesy,” the author said. John Damgard, one of Hurt’s foursome, confirmed to CNN that Trump asked them to leave the course.

“We were on the putting green,” Damgard, a Republican donor, told CNN. “Harry came and said ‘Mr. Trump doesn’t want us to play.’ We went to a different place.” But Damgard took issue with Hurt’s claim that they were escorted off the course by Trump’s security detail. “We had no interaction with security,” Damgard said.

Hurt’s mostly unflattering portrayal of Trump in Lost Tycoon included the revelation of a divorce-proceedings deposition in which Trump’s first wife, Ivana Trump, accused him of rape. Under oath, Ivana Trump had described a 1989 incident of violent, forcible sex. She later told Hurt, in a written statement provided to the author for his book by Donald Trump’s lawyers, that the incident did happen and she “felt violated” at the time. Her statement went on: “I referred to this as a ‘rape,’ but I do not want my words to be interpreted in a literal or criminal sense.”

Asked last May about his ex-wife’s charge of rape, Trump told People in May: “It never took place.”

On Monday, Hurt chalked up the golf-course unpleasantness to “the erratic behavior [Trump] has exhibited his entire life.” And Damgard told CNN that neither he nor Koch were aware of Hurt’s book.

“Obviously it was something [Trump] didn’t like. It is his golf course and it certainly it is his right” to remove a player, Damgard said.