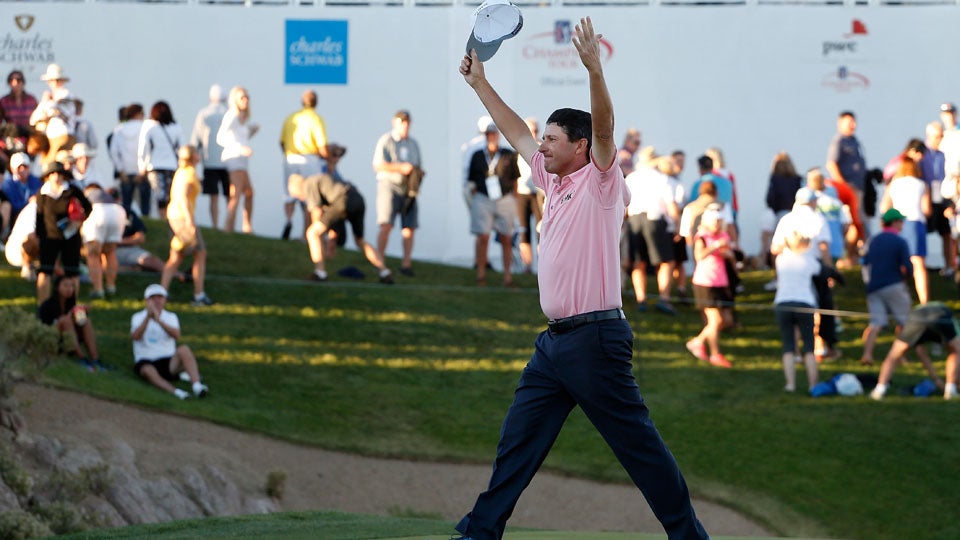 Andrade two-putted from the back fringe on the par-5 18th, holing a 2 1/2-footer for his third victory of the year on the 50-and-over tour.

The 51-year-old Andrade closed with a 6-under 64 on Desert Mountain’s Cochise Course, making a 10-foot birdie putt on 18 to post at 14-under 266. Langer missed a chance to win on 18 in regulation when his 18-foot eagle putt lipped out. He finished with a 67, then failed to get up-and-down for birdie from the right greenside rough in the playoff.

The 58-year-old German star won the Charles Schwab Cup points title for the second straight year and record third time overall, earning a $1 million annuity. He easily beat Colin Montgomerie and Jeff Maggert in the points race after entering the week third in the standings.

Langer also won the money title for the record fourth straight year and record seventh time in eight years, finishing with $2,340,288. The two-time Masters champion successfully defended his Senior Players title in June in Massachusetts for his fifth senior major title and won last month in San Antonio for his 25th victory on the 50-and-over tour.

Andrade earned $440,000. The four-time PGA Tour winner also teamed with Joe Durant – his playing partner Sunday – to win the Legends of Golf in April and won the Boeing Classic in August.

Andrade made a 20-foot birdie putt on the par-3 13th to reach 14 under, dropped a stroke in the par-5 15th after hitting his approach over the green into a crevice between rocks. He got a big break on the par-3 17th when his tee shot struck a rock and bounced onto the green to set up a two-putt par.

Andrade had a hole-in-one in his opening 65 and followed with rounds of 67 and 70 to begin the day four strokes behind third-round leader Michael Allen.

Allen was third at 12 under after a 70. The Scottsdale resident took a one-stroke lead over Langer into the day after leading by six strokes midway through the third round.

Jeff Sluman and Mark O’Meara tied for fourth at 10 under. Sluman eagled the 18th for a 66, and O’Meara closed with a 68.