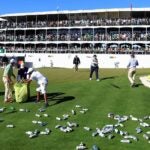 It was "Clean up on aisle 16" this year at the Phoenix Open.

There’s a tricky moment at any great party where the fun approaches the line of decorum. Who will cross the line? Will we all cross it? Will we regret it tomorrow if we do? According to PGA Tour commissioner Jay Monahan, the line was crossed at the biggest party in golf this year.

Monahan spoke with BBC Sport this month and made clear he was not a fan of what went down at TPC Scottsdale at the WM Phoenix Open in February. “It’s never acceptable to be throwing water and beer bottles — we saw it a few times that weekend — and it’s going to be addressed,” Monahan said.

For those unsure of what Monahan is speaking to, the party began slowly, with no aces recorded on the raucous 16th hole through the week’s first two rounds. But Saturday has long been a different beast. The event has often set and re-set attendance records for PGA Tour events on that day over the years. When Sam Ryder made an ace Saturday afternoon, the jam-packed stadium let out a roar, and soon after let all the beers out of their hands.

But did it cross the line? Where was the line? Were fans told they could not recreate what happened when Tiger Woods made a famous ace on that hole 25 years ago?

Monahan admitted to all the circumstances that made such an event happen: Pent up demand for an ace on that hole (it hadn’t witnessed one since 2015); the nature of the pandemic keeping people from communal scenes like that; the inherent history of the 16th hole and the nature of what was built up surrounding it. It wasn’t necessarily a surprise. But a key point is that it didn’t quite stop.

The next day, Carlos Ortiz made an ace, incurring a similar reaction from the fans, and another delay for clean-up on the green. What’s more, according to the report, Ortiz was hit by one of the projectile pops. Later on, when Justin Thomas chipped in for birdie, and more beer took to the sky, many people determined that, perhaps the line has been crossed a few too many times.

Also on Sunday, a scene unlike any the golf world had witnessed before. A day earlier, Dahmen had joked if his tweet gets enough engagement, Higgs would take off his shirt on the 16th green. As you may already know, exactly that happened. Higgs flashed the crowd on repeat! Dahmen ripped off his shirt and twirled it around over his head! Fans went berserk.

But did it cross the line?

“Harry and Joel did get carried away but it’s the atmosphere we’ve created,” Monahan continued. “We’ve got to recognize that’s something we helped to build and when you get situations that need to be addressed, they get addressed.”

Monahan did not go into detail about ‘addressing’ it would look like. But rumors circled on the PGA Tour the following week that Higgs and Dahmen were both in line to earn fines from the PGA Tour.

It all begs the question, How do you maintain the biggest party in golf without it going too far? The biggest attendance annually on the PGA Tour is bound to include some fans with pent up energy, motivation, excitement, etc. A gladiatorial scene with an amphitheater of sun-kissed, boozed-up golf lovers are going to react when they see an ace. And one helluva precedent has been set.

A lot of it, many players have argued, is good for golf. Days later, at the Genesis Invitational, Rory McIlroy discussed the scene from his perspective.

“I saw sort of everything that happened. Phoenix is fun, it’s awesome. I think it’s a novelty on Tour. I certainly wouldn’t want every week on Tour to be like that, but I think these one-off events where that can happen I think is good for the game. I think it encourages people from different walks of life to get interested in the game of golf, to feel like it’s not as intimidating.

“So in that respect I think there are parts of it that are really good and I think it’s a good look for the game of golf to sort of move with the modern times in the 21st century, but there’s a certain line there to be — yeah, just to sort of walk that line between something that is progressive but also doesn’t endanger players, endanger fans, endanger volunteers and I think that was a line that was maybe crossed a couple of times last week. But whenever you get a bunch of people together there’s going to be things that happen and that’s just the nature of it. There’s certainly more pros than cons.”

Collin Morikawa felt similarly, saying that beer doesn’t need to fly every week, but that during a specific tournament, the excitement is worth the attention it drives to the game. “For one time a year, I think it’s fun.”