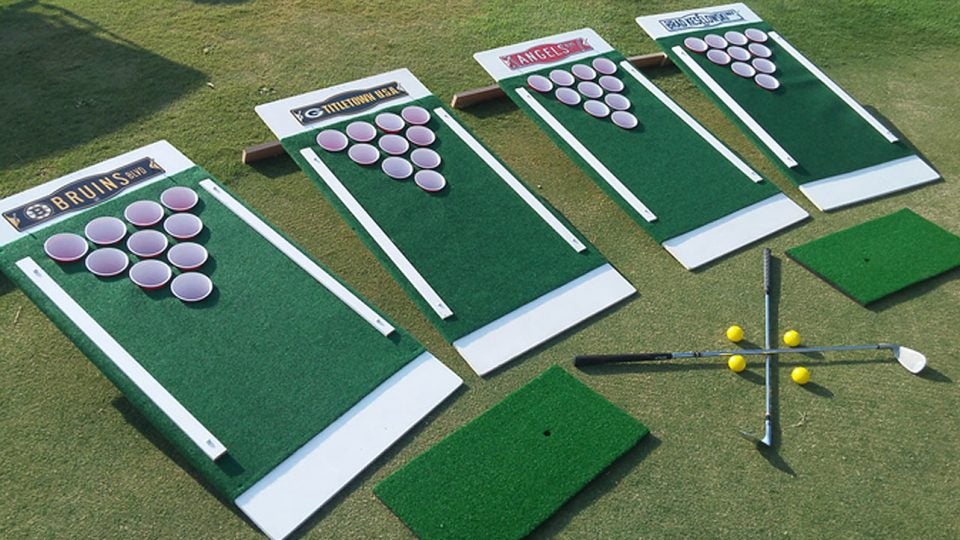 This is not a drill.
Kickstarter

No one asked for this, but maybe it’s what the world needs.

Grab a case of Natural Light and brace yourself for “Beer Pong Golf.” We’ve yet to see the USGA or R&A embrace it as part of a grow-the-game initiative, and if you press your ear against the board you might hear soft wails from the ghost of Bobby Jones. But golf-crazed college fraternity brothers will no doubt rejoice upon learning that this game is coming to a tailgate near you.

How’s it work? To borrow a phrase from the website: “Beer Pong + Golf = Beer Pong Golf! It is that simple.”

It was never going to be complicated. To play, you’ll need two 48″ x 24″ boards, which have 10 slots cut in the shape of bowling pins (and your standard beer pong game) that each perfectly accommodate a plastic Solo cup. The setup also includes green plastic mats and hollow golf balls. Place those 12 feet from the board, divide into teams, and take turns chipping shots. When you land a ball in a cup, your opponent slugs the pilsner waiting inside. And repeat.

The venture was launched on the crowdfunding website Kickstarter earlier this summer, and in a few days it had sailed past its goal to raise $20,000. As of Thursday morning, 874 backers have poured $138,274 into the project. The game’s creator, a South Carolinian named Chase Cassidy, posted a note to inform those early adopters that they will begin receiving their new Beer Pong Golf games in October. A set of two boards, mats and a dozen whiffle balls run $159. You can also slap your favorite team’s logo onto the boards.

Who said golf isn’t doing enough to reach a younger audience? The product’s tagline doubles as a challenge to one of the world’s top players: “Golf Spieth can’t master.”