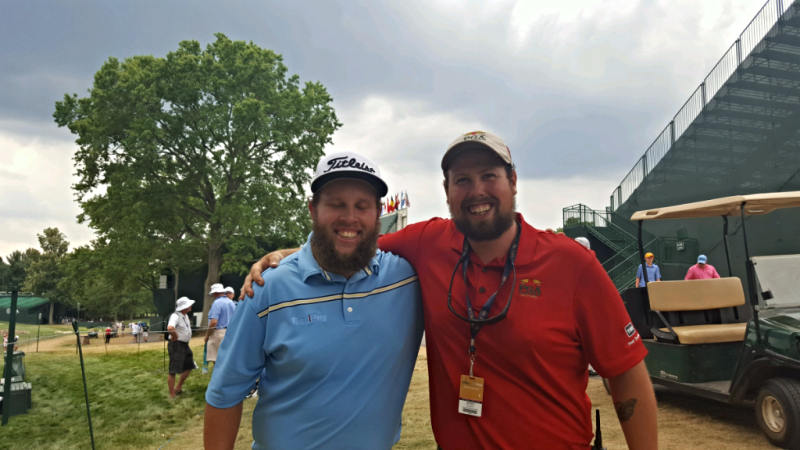 Andrew Johnston and his new similarly looking friend Jerry Elliot are both hard at work this week at Baltusrol Golf Club.
GCSSA

SPRINGFIELD, N.J.—It was news when English golfer Andrew Johnston, whose nickname is Beef, landed an endorsement deal with fast-food chain Arby’s and stopped by a Manhattan Arby’s to help serve sandwiches.

If you didn’t know it, you might think he was helping out on grounds crew staff at Baltusrol this week. That’s not Beef, though. It’s Jerry Elliott, a 27-year-old Beef lookalike who’s got the beard, the belly and the big grin. Elliott is a second-year spray application technician on the Baltusrol maintenance staff.

Like Beef, Elliott also is a fan of food. “I like anything,” Elliott said. “I’ll eat it all.”

The other crew members have christened him Beef, too, in the wake of Johnston’s British Open success. He works on the grounds crew, so does that make him Ground Beef?

Wednesday, Elliott was stopped on the course while working. “Two kids yelled ‘Beeeeeef!’ as I drove by,” said Elliott, who later met Johnston on the 14th hole during a practice round, scoring a picture with his namesake. “The more famous he gets,” Elliott said, “the more I get noticed.”

Where’s the Beef this week? They’re both at Baltusrol, working hard.