Austin Johnson: Caddie (and Brother) of the Year 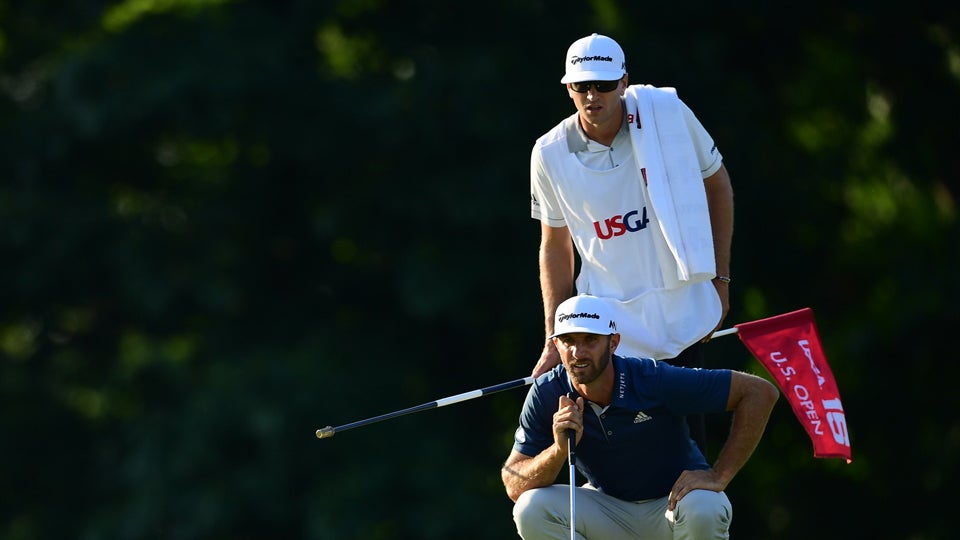 “Chambers Bay made DJ more hungry,” says Austin, 29, “and might have helped at Oakmont.”
Robert Beck

You already know Dustin Johnson. Now meet Austin Johnson, his kid-brother caddie, who did everything he could to help the team win in 2016, even jump in a pond at Sawgrass. Below is an interview with the caddie of the year.

You’ve been on your older brother’s bag for three years. What do you bring to the table?

I don’t think anybody knows him better than I do. I know when to step in and say something, and when he wants to do his own thing. I know his game. If he wants to go for it, I know how to talk him into laying up, because his wedges have been so good lately. I try to keep him in a good mood and focused.

Does being his brother help or hurt as a caddie?

It’s more about us being best friends than being related. Being brothers doesn’t necessarily mean you have a good relationship. But we do. It helps his game that we get along so well.

How difficult was it for DJ to get so close at Chambers Bay, only to finish second to Jordan Spieth?

It was tough to overcome. As soon as [Dustin] walked off the green, he took Tatum, and he didn’t want any social media, any Golf Channel or ESPN. We went with the Gretzkys and their family to their lake house in Idaho. We all hung out for a week and kept it in the inner circle. Tried not to think about it, as hard as it was. Just get away from it.

Yet he came back so strong in 2016. When did you realize that this was going to be a special year?

At Riviera [in February], he scored okay on Thursday, but he didn’t have his best ballstriking day. It started raining during our last few holes, and after the round he went to the range and worked in the rain for an hour and a half. He’d never hit balls in the rain, especially after a round. He was so dedicated this year, so focused. It’s like he was on a mission.

At Oakmont on Sunday, were you fuming about the whole will-they-or-won’t-they rules issue that hung over you both?

I was pretty heated, but I tried not to show it. Dustin didn’t show it. I told him, “Nothing we can do about it. It’s out of our control. Let’s keep playing solid golf, and everything will take care of itself.” We tried not to think about it. He had the lead. Last thing we wanted was to let that interfere. He was playing great.

You hid your emotions well.

I didn’t want him to see me frustrated. He was so focused. He came up to me on the 18th green, and he didn’t even know how he stood. He hadn’t looked at a scoreboard all day. I told him on the 18th green that he had a three-shot lead, and he just goes, “Oh, good.” [Laughs]

Really? He’s on the 72nd green and didn’t know if he led or trailed?

He was focused on his game, on sticking to his game plan. He didn’t want to let the ruling distract him.

Was the celebration crazy that night?

He had media [until] late. Then we got on the plane and went to the Bahamas and did a lot of spearfishing and just hung out on the beach. It was nice.

You wore your USGA caddie bib for days afterward. Did you ever wash it?

I didn’t take it off all week! I washed it and got it framed, but I had to enjoy it first. I played golf in it, speared fish in it, went to dinner in it. Everything.

He went right out and won his next event, the WGC-Bridgestone Invitational, at Firestone. So much for a post-Oakmont letdown.

He was playing so well. I just kept him focused, kept him hungry.

Part of a caddie’s job is knowing when to stay out of the way, right?

Absolutely. When he’s swinging well, I get the numbers, I tell him the wind and just keep it simple. Why would I want to get in the way?

Other times, you get very involved. Why did you go into the water at the Players to retrieve Dustin’s ball?

[Laughs] We were playing with Bubba and Rory. On the green, DJ went to toss me his ball, but it slipped out of his hand and into the water. An official said we had to find it to avoid a penalty. Dustin looked at me like, “Well, I ain’t jumping in to get it.” I was the only one left.

Brother or not, that’s when you know your place as a caddie.

Yeah, the water was so nasty—I didn’t want to take my shoes off.

In October, your fellow loopers named you the Caddie of the Year. How did that feel?

With Dustin being the Tour’s Player of the Year and winning a major, I figured I had a chance. It was a big honor.

On the greens. You can always improve your putting. Last year, we worked on shots from 150 [yards] and in. He went from back of the pack to the front. He drives it great, is a great ballstriker, and now we’ve got the wedges going. If we get more consistent on the greens, I don’t know what would stop him from having another great year.