This week’s mailbag once again features a wealth of Tiger-related questions. Let’s get into it:

Will the Hero World Challenge win be a harbinger of a big year to come for Rickie, as it was for Jordan Spieth and Hideki Matusyama? #AskAlan -Mark (@GoMasonSID)

Gawd, I hope so. There’s nothing Rickie Fowler can’t do to a golf ball. As we’ve seen on certain Sundays, his challenges are metaphysical. The World Challenge is a mostly meaningless tournament on a lame golf course but Fowler’s 61 to storm to victory could have long-term ramifications, if he can build on that performance and have more confidence/conviction when in contention. This coming season was always going to be vastly important for Fowler, and the win at the World Challenge only adds to the intrigue. 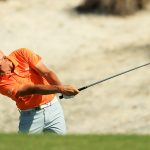 You may also like Rickie Fowler fires course-record 61 to win the Tiger Show (aka, the Hero World Challenge)

Is Tiger going to win the Masters in 2018? -@JimmyLobus

Given that his Ryder Cup record during his prime was average, would Tiger weaken or strengthen the 2018 team? #askalan -@TigerPencil

A similar question was asked by Nick Blauw (@NickBlauw2), who wondered if Tiger is a better asset as an assistant captain. It’s true that even when Woods was playing the most dominant golf of all time he struggled at the Ryder Cup, a big reason why those U.S. teams usually lost. This goes back to the Tida/Earl influence – Tiger was taught to separate himself from the competition in every way. His inner-self was a well-guarded fortress. No chance was he going to give away secrets, or a chunk of his aura, in the team room to guys he would be trying to beat for the next 103 weeks. But ever since Thanksgiving 2009 the team events have taken on a different meaning for Tiger. The players and leadership of the U.S. teams offered him camaraderie and brotherhood and acceptance, all of which he desperately needed. This allowed Tiger to let down his guard and fully integrate himself into the teams, whether as a player or assistant captain. This is a huge part of his transition into a beloved elder statesman. So, if Tiger can piece together enough game he will be a powerful asset at the Ryder Cup. His younger teammates grew up idolizing him and any of them will play their ass off if paired with Tiger. And, having now realized that he needs the Ryder Cup more than it needs him, a humbled Tiger would be able to bro up in a different, more generous way. If Tiger’s health or poor form keeps him off the squad as a player he will certainly be an impactful vice captain, commanding respect in the team room and offering a wealth of knowledge and experience, which he now liberally shares.

Alan, what do you make of this feud between Jason Dufner, Chuck Cook and Brandel Chamblee? Chamblee attacking one of the game’s most respected teachers seems odd. -@PatObrienGolf

I haven’t delved into the backstory between Texas’s own Chamblee and Cook, but it feels like there has to be one, because Brandel’s comments have been so pointed. In this instance it helps to think of Chamblee not as a TV personality but as one of the foremost dispensers of swing theory, which he is. That’s Cook’s racket, too. Swing gurus are a very catty bunch, with a lot of ego invested. 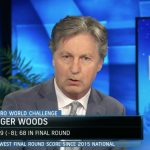 You may also like Brandel Chamblee: ‘I was wrong’ about Tiger Woods’s comeback

There is often an element of I’m-right-you’re wrong fanaticism, which is quite curious given that there are so many different ways to swing a golf club effectively. Dufner’s role in this can be seen merely as a player sticking up for his coach, which is admirable, even though he is being as strident as Chamblee. But Dufner is not exactly the easygoing dude of Duf mythology; that dude has very thin skin. His attacks on Chamblee have been so over-the-top it makes me wonder if he has previous beef with Chamblee. Clearly we need a 30 for 30 on this whole kerfuffle. 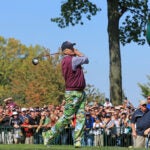 You may also like Billy Horschel questions Brandel Chamblee’s credibility: ‘You are a ghost on the range’

What is your favorite, really bad movie? -Marc (@Mhutzell)

Do you ever get confused for Terry Gannon? -@WillBardwell

Funny enough, one of my golfing buddies just a couple of days ago went on a long riff about how much we look alike. I will say, Gannon is a dashingly handsome fellow. But I’m most often confused for veteran golf scribe Adam Schupak, mostly because our names are similar. It’s happened on Twitter, via email, and on the phone. I’m pretty sure Schupak has suffered the stink-eye from a few players who thought he was me. Poor bastard.

Your pick for an over- 40 player to be in contention Sunday at the Masters. -Fry (@panicstreak)

Is this a Tiger question in a clever disguise? Easy answer: Langer. 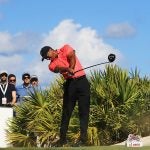 Do you have another book in the works? Any fiction? -@EricWalker72

I do have a new coffee table book that will be in hand literally any day now. It’s a glossy club history of Monterey Peninsula Country Club. It was a fun project, piecing together the old tales from a club with a rich history: S.F.B Morse, the patriarch of Pebble Beach, conceived the club; Seth Raynor drew up plans for both the Dunes and Shore Courses but died before construction began; Alister MacKenzie’s right-hand man, Robert Hunter, oversaw the completion of the Dunes with input from his boss. Both courses have been reborn this century thanks to extensive reworkings, and all of that is covered, too.

I’m also working on a little passion project, having typed up my great aunt Harriet’s memoirs. She’s had a wildly entertaining life and it’s a charming little book that will be published early next year. With any luck it’ll turn into the next Tuesdays with Morrie. Bamberger and I continue noodling on a sequel to The Swinger. I believe in my heart of hearts it’s gonna happen. From what we’ve outlined so far it has a chance to be insanely entertaining. In the meantime, I’ll continue to write fiction every time I file an expense report.

Is Pádraig Harrington in the top five golfers of his era? -@JohnLillis13

Harrington won his first tourney in 1996, the year Tiger turned pro, so it should be pretty easy to define this particular era. There’s not much debate about the top 4 players of the Tiger era, though you can squabble about swapping numbers 3 and 4:

But when does the Tiger era end? If it’s 2009, Harrington is an easy choice for number 5 on the list. If we call it 2013 then it gets more complicated because that encompasses the first half of Rory McIlroy’s career (so far). But clearly McIlroy is going to play most of his golf long after Tiger’s prime. I’m putting Harrington on the list above and creating another ranking, for which we’ll grandfather in Rory’s major championship victories (and all-around terrific play) in 2011 and ’12. So here’s the ranking of the post-Tiger era:

What was your scariest rivalry of 2017: the entire continent of Europe, the President of the United States, or Shaun Micheel? -Michael (-@mauriellom)

Jeez, I guess it has been an eventful year. I ‘spose my resolution for 2018 should be to make more friends… but that sounds kind of boring.