Arnold Palmer poses on the Swilcan Bridge with the members of his winning Champion Golfers' Challenge team.
David Cannon / R&A

ST. ANDREWS, Scotland — Moments before their 4:10 starting time in the Champion Golfers’ Challenge on Wednesday afternoon, Tom Weiskopf gathered his team of Tiger Woods, Mark O’Meara and Nick Price for an impromptu pep talk in the shadows of the R&A clubhouse.

“I got one thing to say to you guys,” the 6-foot-3-inch Weiskopf barked.

The men leaned in.

The group cracked up and off they went to commence the second playing of one of golf’s most entertaining events, a seven-team hits-and-giggles contest featuring 28 players who each have at least one claret jug to his name. Part all-star game, part old-timers day, the Champion Challenge is the R&A’s answer to the Masters’ Champions Dinner.

Only it’s a hell of a lot more fun, because fans get a seat at the table. 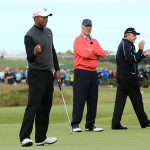 You may also like Champion Golfers’ Challenge at the 2015 British Open at St. Andrews

Where else do you get to see 85-year-old Peter Thomson peg it with Phil Mickelson? Or Gary Player fist-bumping with Stewart Cink? Or Tony Jacklin paired with … is that John Daly? The randomness was part of the fun, as was the marching band playing regal tunes on the 18th green, as were the wonderful little scenes that unfolded just everywhere you looked.

On the practice green Thomson shook hands with the strapping caddie, Steve Williams. By the first tee, Phil Mickelson congratulated Michael Watson, Tom’s son, on his recent nuptials. Behind the first tee, David Duval snapped photos. Justin Leonard strolled down the first fairway hand in hand with his young son.

Out on the course, where the men played the 1st, 2nd, 17th and 18th holes, more fun. On the 2nd, Paul Lawrie broke into dance after holing out from the right rough for an eagle 2. On 17, Graeme McDowell, who is not an Open champion but was out on the course practicing, crashed the tee box for a photo with Gary Player. When John Daly sauntered up to the tee at 17, resplendent in argyle clown pants accented with New York Yankees logos, an Orioles fan in the gallery took umbrage.

When Lawrie and Darren Clarke, in the group behind Daly’s, reached the Road Hole green, Lawrie and Clarke sized up a 10-footer that Lawrie had for birdie.

“I had this putt yesterday,” Clarke said.

Before each foursome hit its opening drives, a BBC presenter asked each player a question or two near the first tee. When Tom Watson’s time came, he wasn’t asked about Arnold Palmer but he went out of his way to praise him.

“Arnold is the man who really changed the Open,” Watson said, his voice carrying through speakers stationed around the packed grandstands.

Watson then went on to recount how Palmer played his first Open in 1960, finishing second at the Old Course, before winning his next two Open starts, in 1961 and ’62. Those performances helped convince the great American players of that era that the Open was worth the trip, immediately bolstering the championship’s stature.

Palmer himself was in attendance at the Champions Challenge, captaining the anchor group of Lawrie, Clarke and Bill Rogers. He looked frail — there’s no other way to say it — and hit no shots beyond an opening drive. Not that the fans cared. This week may belong to Watson, who has announced that this Open will be his last. But this cool Wednesday evening under blue skies and wispy clouds belonged to Arnie.

When his teammates cleared the tee on 18, Palmer joined them on the Swilcan Bridge for what may well be his last photo-op on this sacred spot. Then he clambered into a cart with his wife Kit and enjoyed a slow drive up the home hole. Fans showered him with cheers and applause from the towering stands, from the veranda of the Rusacks Hotel, and from The Links walkway that runs the length of the hole. Keegan Bradley came out to pay his respects, following Arnie’s group up 18 and snapping photos on his phone along the way.

When Palmer’s team finished up, they had landed in a four-way tie for first, but ended up taking the title with the tiebreaker: oldest team.

Palmer toddled over to ESPN’s Tom Rinaldi, who was waiting with a microphone. As the two-time Open champ struggled to convey his emotions, his eyes watered and his voice cracked.

“They all remember,” Palmer said.