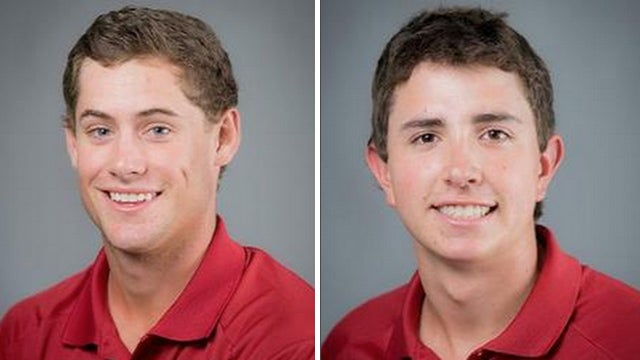 Two Arkansas Razorback golfers have been suspended after being arrested Wednesday for taking explicit photos of a woman without her consent.

According to a report by local Fayetteville, Arkansas, station KARK 4 News, Taylor Moore, 21, and Nicolas Echavarria, 20, both juniors, face charges of video voyeurism.

Here are the details of the police report:

The victim told police that Moore gave her a shirt to sleep in, and that she remembered being carried to his bedroom. She told police she also remembered seeing a flash of light and thought Moore had taken pictures of her.

Moore is one of the team’s best players, currently ranked 42nd in the country. In 10 starts this season, he had a team-best scoring average of 71.8, earned All-SEC Second Team honors on April 30 and earned co-medalist honors at the 2014 U.S. Amateur.

The fifth-seeded Razorbacks are set to play Yale at next week’s regional NCAA tournament, but they’ll have to do it without Moore and Echavarria, who, according to a statement released by the University of Arkansas Athletic Department, have been suspended indefinitely pending legal action.