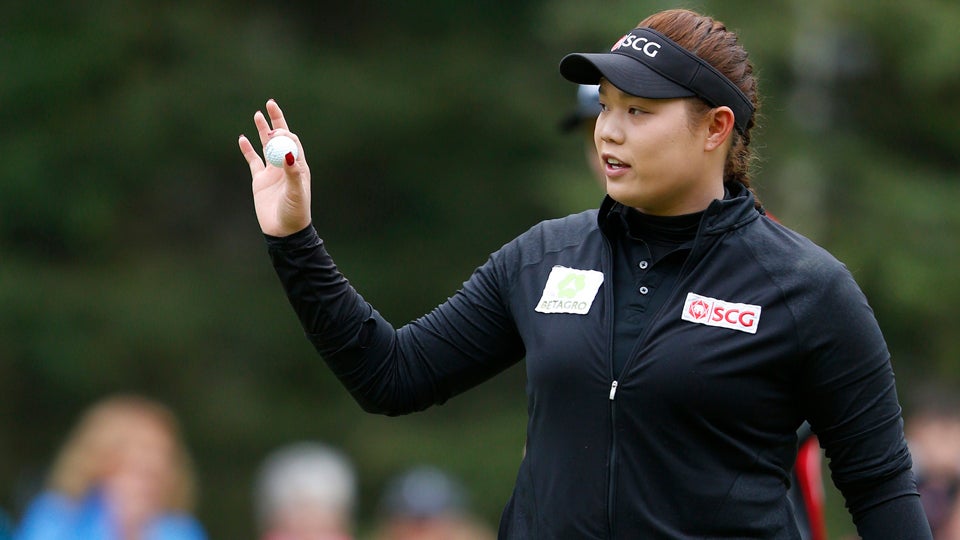 Ariya Jutanugarn waves after making a putt on the 1st hole of the final round of the Canadian Pacific Women's Open. Jutanugarn added another victory to her resume.
Getty Images

PRIDDIS, Alberta (AP) — Ariya Jutanugarn ran away with the Canadian Pacific Women’s Open on Sunday at chilly Priddis Greens for her LPGA Tour-leading fifth victory of the year.

Nine days after withdrawing from the Rio Olympics because of a left knee injury, the 20-year-old Thai player made a 12-birdie putt on the final hole for a 6-under 66 and a four-stroke victory.

“I felt like I wanted to have fun and be happy on the course,” Jutanugarn said. “No matter what’s going to happen, I can handle it. … I feel really happy with myself right now.”

Bundled up in a winter jacket between shots with the temperature in the lows 50s on the overcast afternoon, the second-ranked Jutanugarn matched the tournament record for relation of 23 under set by So Yeon Ryu two years ago at London Hunt in Ontario and the mark for strokes of 265 set by Ryu and also accomplished by Lydia Ko in 2013 at par-70 Royal Mayfair in Edmonton.

South Korea’s Sei Young Kim, a two-time winner this year, was second after a 65.

After a late meltdown cost Jutanugarn her first LPGA Tour victory in April in the major ANA Inspiration, she broke through in May with three straight victories. She won the Women’s British Open in the event before the Olympics, and made it two in a row on the tour Sunday in the foothills of the Canadian Rockies.

Blasting 2-iron and 3-wood off the driving holes on the tree-lined course, the long-hitting Jutanugarn birdied the par-5 seventh and par-3 eighth to get to 19 under, then pulled away with birdies on the par-5 12th, par-4 14th, par-3 15th and par-5 18th.

“My tee shots pretty good all week,” Jutanugarn said. “My irons getting a lot better in the last week or so.”

Canada’s Alena Sharp had the best result of her LPGA Tour career, birdieing the final two holes for a 67 to finish fourth at 16 under.

Australia’s Karrie Webb (64) and Sweden’s Anna Nordqvist (68) tied for fifth at 15 under. Webb won the 1999 du Maurier Classic, the then-major championship that folded because of Canada’s restrictions on tobacco promotions, at Priddis Greens. She was second behind Suzann Pettersen at the course in 2009.

Three-time champion Ko had a 69 to tie for seventh at 13 under.

“I was a little far away going into today,” Ko said. “But it’s been a great week. I played solid all week, and there’s a lot of positives to take from this week.”

She won three of the previous four years, the first two as an amateur. The 19-year-old New Zealander is No. 1 in the world and has four LPGA Tour victories this season.

Canadian star Brooke Henderson shot a 69 to tie for 14th at 11 under. The 18-year-old from Smith Falls, Ontario, is already thinking about next year’s tournament at Ottawa Hunt.

“Next year in Ottawa is going to be amazing,” Henderson said. “We recently became members at the Ottawa Hunt, so it’s my home golf course. It’s only 45 minutes from my house. Lots of family and friends are already asking for tickets to come down and watch. I’m just really looking forward to it.”

She also will play in her home province next week in the Manulife LPGA Classic in Cambridge. Henderson beat Ko in a playoff in June in the KPMG Women’s PGA Championship for her first major title, and successfully defended her Cambia Portland Classic title last month.