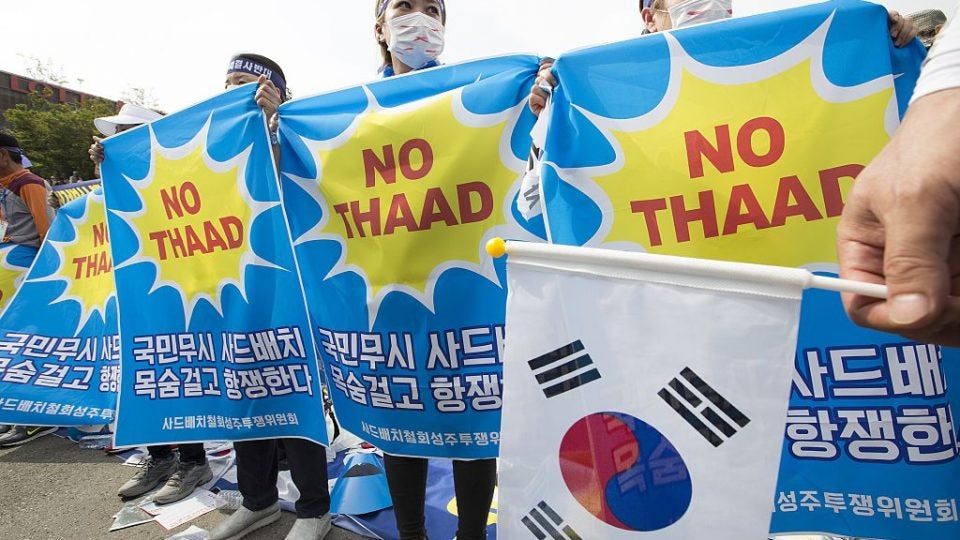 SEOUL, SOUTH KOREA - JULY 21 : Residents of the Seongju municipality attend a rally in front of Seoul Station in Seoul, South Korea, 21 July 2016, to protest against the deployment of an advanced US missile defense system, known as Terminal High Altitude Area Defense (THAAD), in the town of Seongju, a county some 300 kilometers southeast of Seoul. (Photo by Kim Jong Hyun/Anadolu Agency/Getty Images)

A new U.S. anti-missile defense system is being put in place on the site of a converted golf course in South Korea, part of a plan to protect South Korea from North Korean missile attacks, according to the Associated Press and other reports. The former Lotte Skyhill Country Club was owned by the Lotte Group until the conglomerate ceded the land to the government in a swap so that the system could be installed on the golf course.

The system, called THAAD (Terminal High-Altitude Area Defense system), is located in a rural area of South Korea called Seongju. The installation has attracted protest in China and South Korea. Local residents are concerned about the dangers of having the system nearby, while China views the system as a security threat.

The Lotte Group is a sponsor for the LPGA tour.