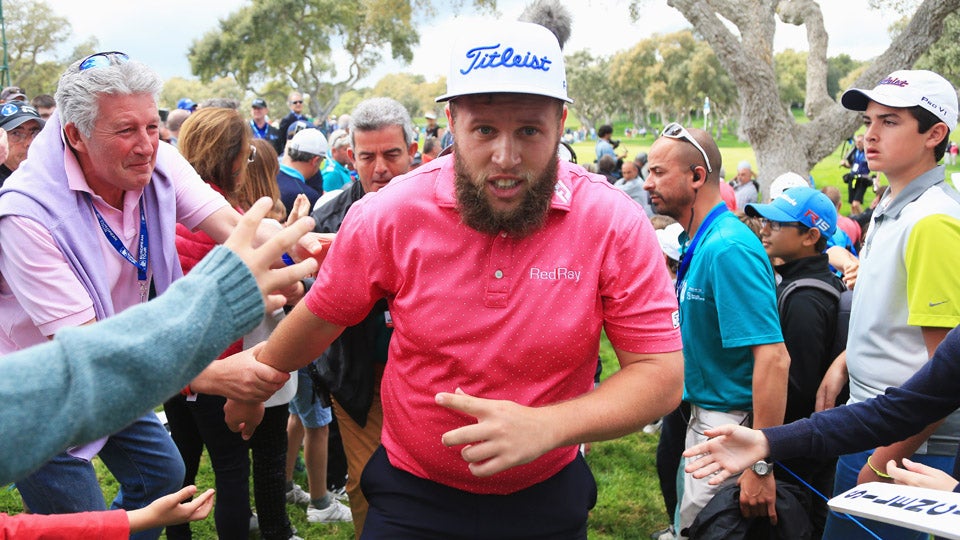 Andrew Johnston walks past spectators on the 18th green after his final round of the Spanish Open at Real Club Valderrama on April 17, 2016, in Sotogrande, Spain.
Matthew Lewis

SOTOGRANDE, Spain (AP) — Andrew Johnston of England shot a 1-under 70 at Valderrama on Sunday to win the Spanish Open for his first European Tour victory.

Johnston finished with a 1-over 285 for the tournament, one shot ahead of Joost Luiten of the Netherlands and two shots in front of tournament host Sergio Garcia, who made a great charge with a final-round 4-under 67, the best of the day.

The Spaniard had the lead coming into the final hole after making consecutive birdies on Nos. 16 and 17, but he closed with a bogey to drop out of contention. Garcia also bogeyed the 15th hole. He had a total of six birdies on the day.

Johnston’s final round included two bogeys and three birdies. He secured the victory by making a difficult short par putt on the par-4 18th.

MORE: Johnston Can’t Wait to ‘Get Hammered’ After Win

“I’m pretty speechless, so happy with the way I’ve played,” he said. “I drove the ball well all week, chipped and putted well all week, I struggled a bit with my irons the first three days but I just kept going and kept digging in and then on the fourth I found something.”

Johnston’s first win in 63 European Tour tournaments took him to 16th in the Race to Dubai.

The strong winds that had made conditions tough during the earlier rounds subsided and players were able to attack the flags more often.

Luiten, a four-time European Tour winner, needed a birdie on the final hole to tie Johnston but found the greenside bunker with his approach shot.

Defending champion James Morrison of England tied for fourth at four over. Two-time major winner Martin Kaymer of Germany bogeyed the last two holes to finish at five over, in a tie for sixth.

Mike Lorenzo-Vera of France, seeking his first European Tour victory, entered the final round with a one-shot lead but collapsed with a 4-over 75, finishing in a tie for ninth.