The good news for Bernhard Langer: He just won his record third Charles Schwab Cup on the Champions Tour, and second in a row. The bad news: His anchored style of putting will be officially outlawed in less than two months.

The German who has won 25 times on the Champions Tour has putted with an anchored stroke for 17 years. He’s had success with a variety of other strokes, but hasn’t yet decided just how he’ll putt once the anchor ban kicks in on Jan. 1, 2016.

Before finishing second at the season-ending Charles Schwab Cup Championship, and thus locking up the Cup title, Langer had the following to say to Golf Channel:

“I think I’m going to figure out another way to put well,” Langer said confidently. “Whether I’m going to go back to the way I putted for seven years, leaning the shaft against my left forearm—I won my second masters that way and a bunch of other events—or whether I’m going to adopt some other shorter putter or even continue with the long putter and not anchor it, I don’t know yet.

“I’ve always said I’m going to wait until this tournament was over, and I have two months to practice and figure it out.”

Langer certainly isn’t concerned about the ban, and for good reason. As he said, he’s had success without the anchored stroke. But that doesn’t mean he hasn’t been experimenting.

“I’ve thought about it a little bit. I’ve gathered a few putters, different styles, different lengths, different grips. My first thought is I’ll probably go back to what I did before I went to to the long putter, which was what Kuchar does, holding the putter against the left forearm that way, and Soren Kjeldsen in Europe does the same thing.

“…if you can putt on the Masters greens and win with a grip like that, I would think I could do it in other tournaments, but we’ll see. There’s other options.” 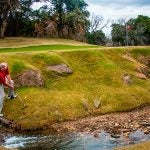 You may also like Putting Tips: Dave Pelz’ 3 Best Alternatives to Anchored Putting

The Champions Tour season is over, meaning we won’t see Langer with his anchored stroke again. Four of the top 10 players in the year-end Charles Schwab Cup standings putt with an anchored stroke in one form or another, so Langer is far from alone. But until he finds a reliable, confident and legal stroke, Langer’s dominance might be hard to maintain.