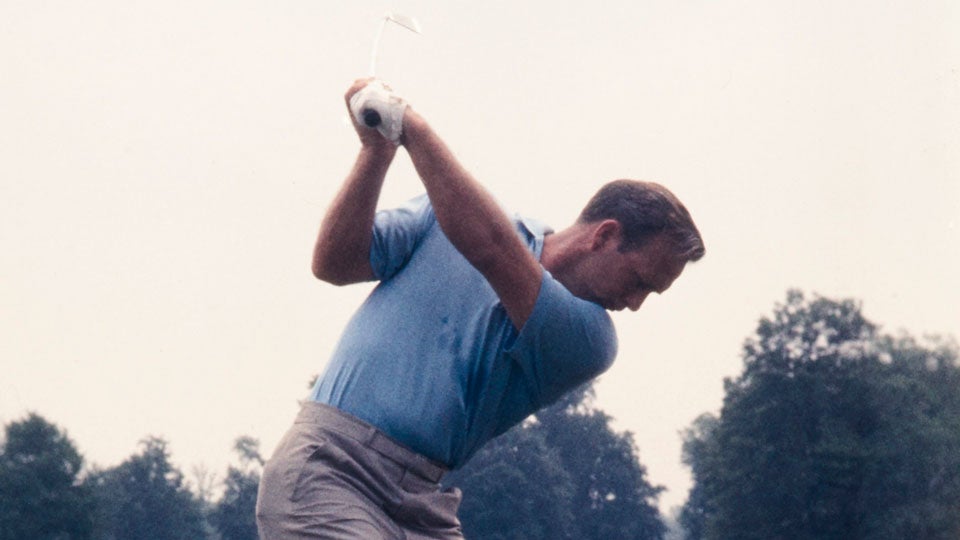 Arnold Palmer competed in his final U.S. Open at Oakmont in 1994.
Fred Vuich

All Arnold Daniel Palmer did was save golf. All he did was bring golf to the truck drivers and the mailmen and the women trying to make three no-trump in their neighborhood bridge groups. Basically he took a game that was a little too prissy, a little too clubby, a little too saturated with Ivy League men trying not to soil their cardigans, and breathed sweet life into it.

There had been great players before, of course. Ben Hogan in particular had been a great one, but Hogan was about as lovable as a border guard, an automaton who walked down the middle of the fairway without looking left or right. Arnie never did that. You kidding? Arnie was rarely in a fairway. Golf got lucky with Palmer. Just when live TV started poking around golf, this handsome, broad-shouldered young piano mover of a man came along. Palmer walked fast, let his hair get mussed and bummed cigarette lights from the gallery. This was definitely not Hogan. Hogan had a good tailor. Palmer’s shirttail wouldn’t stay tucked. Small wonder. Every time Arnie swung, you thought he was going to fall off the tee box. His swing was not at all a swing, but more a mad slash, like a furious pull of the cord while trying to start a stubborn lawn mower.

In 1958, when CBS was televising its third Masters, Palmer won. He also won CBS’s fifth and seventh and ninth Masters. Suddenly golf was something women peeked at from under their hair dryers and men from over their cold Falstaffs. Here was a guy about as Ivy League as bratwurst, the son of a pro who ran a nine-hole golf club in rural Pennsylvania. He was earthy and sexy and tan, and best of all, emotion leaked out of him from every pore. When Palmer came from seven shots back in the final round to win the 1960 U.S. Open at Cherry Hills in Denver, it was as passionate a victory as golf had ever enjoyed. He drove the par-4 1st hole, birdied six of the first seven and, after sinking the final putt on 18, leaned back on one spike, smiled gloriously and flung his visor into the Colorado air. Nobody had ever seen Hogan do that.

What you had here was love. Sam Sixpack loved Arnie because Arnie seemed to want to win as much as he did and yet seemed to have no better tools with which to do it than he did. Palmer muscled every shot with a low, hard hook that often wound up behind a juniper bush. He would carry eight putters with him to the course and agonize over which might betray him that day. But he had strength and will. The strength he would use to smash out of the weeds and onto the green. The will he would use to sink the impossible got-to putt. “If I ever had an eight-foot putt, and everything I owned depended upon it,” golfing legend Bobby Jones once said, “I’d want Arnold Palmer to take it for me.” It was the passion exhibited on his face that brought the fans out, the grins and the grimaces. No golfer in history has ever had the devotees that became Arnie’s Army; its soldiers were so devoted that it was not unusual for one to let himself be hit by a Palmer missile to keep it from bounding over the green and into trouble.

But Palmer’s greatness didn’t last. Although he ranks fourth [now fifth] on the PGA Tour list for most career wins, with 62, he won all seven of his majors and both of his PGA Player of the Year awards in just seven seasons (1958-64). His charisma nonetheless has endured. Tour players today respect Palmer, the one they call the King, more than any other man. He was golf’s first pro to make a million, the first to have his own logo and the last still signing autographs when everybody else had long since escaped to courtesy cars for rides back to the Hilton.

And so it was that when the 64-year-old Arnie came to the 18th green at this year’s U.S. Open in Oakmont, Pa., down the road from the little nine-hole course he grew up on, the rolling roar made by the crowd shook the water glasses in the players’ scoring trailer 100 feet away. This would be Palmer’s last Open, and nobody wanted to miss it—not the fans jammed in the stands, not the television cameras in the blimp poised overhead, not the row upon row of reporters who had run out of their air-conditioned press tent to watch. And at the height of the tumultuous ovation, as tears came to Palmer’s eyes, a young tour pro named Rocco Mediate hugged him close and whispered in his ear what golf already knew but what Palmer may never have heard: “You made all this possible.”

This article originally appeared in the Sept. 19, 1994 issue of Sports Illustrated.