After whirlwind few weeks, Ian Poulter makes most of chance at Players

PONTE VEDRA BEACH, Fla. (AP) — Ian Poulter is back among the top 100 in the world. He has gone over $1.25 million for the year. He doesn’t have to worry about keeping his PGA Tour card next year.

Poulter never imagined all this two weeks ago.

He was playing on a major medical extension from a foot injury last year and had 10 tournaments to earn enough money or FedEx Cup points to keep full status. Poulter fell short when he missed the cut in his 10th start at the Texas Open, and he figured he would be stuck asking for exemptions the rest of the year.

That’s when a clerical oversight — discovered by Brian Gay — saved him.

The PGA Tour changed its FedEx Cup points distribution that mainly effected the middle of the leaderboard, but players on medical extensions are supposed to play under the same set of rules as when injury sidelined them. Poulter not only got his card back, but the extra points put him in The Players Championship.

The Englishman took it from there. He was the only player to seriously challenge Si Woo Kim on the back nine Sunday at the TPC Sawgrass, and his incredible bogey save from the woods on the 18th hole gave him a 1-under 71 and a tie for second with Louis Oosthuizen.

The points make him virtually a lock for the FedEx Cup playoffs this year, and the $940,000 was his second-highest paycheck behind his victory in the Match Play Championship seven years ago.

”It’s been a big week,” Poulter said. “To have two, three weeks ago been in a position where I wasn’t playing The Players and potentially didn’t have a card to play and was looking to write nice letters to Jack (Nicklaus) for Memorial and all of those great tournaments that I’d like to play in, things change pretty quick with good golf, and that’s what I’ve done this week. I’ve played good golf. I think I’ve still got some work to do. The putter is not quite doing what I would like.” 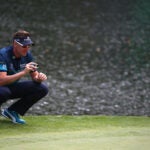 You may also like Brandel Chamblee: Ian Poulter ‘clearly did not play to win’ Players

Poulter went 39 consecutive holes without a bogey and he was tied for the lead until Kim made a 25-foot birdie putt on No. 7. Poulter closed within one shot with a birdie on the 11th, but his chances began to slide when he played it safe off the reachable 12th hole. His wedge came up well short, and his long putt from just off the green ran 6 feet by the cup. He missed the par putt, and only had one really good look at birdie the rest of the way.

His best hope was a mistake from Kim, who played bogey-free for a three-shot victory.

Even so, Poulter’s outlook sure is different.

“It wasn’t looking like a great summer,” he said, referring to the prospect of trying to get PGA Tour invitations when he typically spends most of his summer in England with his family. “For that all to turn around the way and for me to be sitting here in a slightly different situation, it’s pleasing.”