Not the Sergio Garcia, just a reasonable facsimile with a dramatic shot played in the style of Sergio Garcia.

Nick Palladino, a former University of Rochester player, blipped a poor tee shot right of the cart path on the par-5 16th hole at Southern Hills Plantation Club. He faced a slippery stance on the cart path for his layup shot, so he pulled a Sergio. He removed his golf shoes first.

“I saw Sergio play a shot in his socks once off some stones and I thought that was brilliant,” Palladino told his playing partners, Jon McLean and Mike Van Sickle (my son), as they walked to the 17th tee after Palladino had salvaged his par. “I thought, I hope I never have to do that, but that was smart.”

Playing in his socks afforded Palladino better balance. On some practice swings, he said his golf shoes were slipping all over. He could have taken relief from the path but he had a decent lie and if he’d taken a drop, he’d have been in tree roots so his best option was to play it where it was. Sans socks, Palladino got his second shot back into play, put his third on the green and two-putted for a par, which one of the caddies kidded him about, saying, “It’s never good if you’re not wearing shoes for your second shot.”

The banter was light and friendly and fun. This was only the first round, no one is feeling pressure yet, plus 21 players and ties in the 76-man field will advance to the Web.com Tour Q-school final stage next month, so it’s not the dog-eat-dog mentality of most stroke-play tournaments. The four-round event concludes on Friday at Southern Hills, one of five second-stage qualifying sites.

“It was a good pairing today,” said McLean, whose father, Jim, is one of the game’s best-known instructors. “I’ve known Mike since junior golf so we get along pretty well.”

Palladino shot 75, McLean shot 71 and Van Sickle had four birdies and an eagle for 68 in the opening round.

McLean was pleased with his round because, he said, “I really didn’t hit it good all day but I kind of sneaked off with a decent score. It was not a great start but Q-school is always a little nerve-wracking. So I’m going to go work on the range for a bit.” 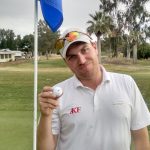 You may also like Second Stage of the Web.com Tour’s Q-School a Test Unlike Any Other

One odd thing about Q-school second stage is that other than a few parents, wives or girlfriends, there are few spectators. Mike’s mom and I were the only ones walking with the group. There wasn’t much wind, either, and the course was so quiet that, except for the ca-caws of the birds, you could hear the distant traffic noise on U.S. 41.

“You get used to the quiet on the mini-tours,” McLean said. “Thursday and Friday, you’re usually alone, just your group. If you’re in one of the last groups on the weekend, there are fans.”

McLean played on PGA Tour China this year—or tried to.

“They kept postponing some of the events,” McLean said. “The government is anti-golf now and it started shutting down courses.”

He went over in February and came home, went back in late March and played through June. There was supposed to be a month break and the tour would resume but due to cancellations, McLean said, it wound up being dark for two-and-a-half months.

“Every time I booked a flight, they’d cancel the tournament three days before I was going to leave,” McLean said. “If I’d known that, I would’ve planned accordingly and maybe played in Canada. They started playing a bunch in a row last month in China but I had to come back to play the first stage of Q-school because I wasn’t in the top 20 on the money list.”

The PGA Tour China experiment was not a good experience for McLean. “The food is really bad,” McLean said. “You pretty much have to eat at the course or the hotel buffet and guys were going down with food poisoning all the time. I packed a lot of my own stuff like crackers, bars, pounds of peanut butter and rice. I lost 15 pounds over there and I can’t afford to lose any weight.

“They do a good job of getting you around. They pick you up at the airport and they have shuttles to the course but I didn’t try to go anywhere on my own. My Mandarin is kind of rough.”

He laughed at that line. And if all goes well, McLean will still be smiling on Friday.

Bubba Dickerson, a former U.S. Amateur champ, and Josh Hart shared the low score of the day at 65, 7 under par.