A Year in Golf: When Woods Will Play, DJ’s Meltdown and More 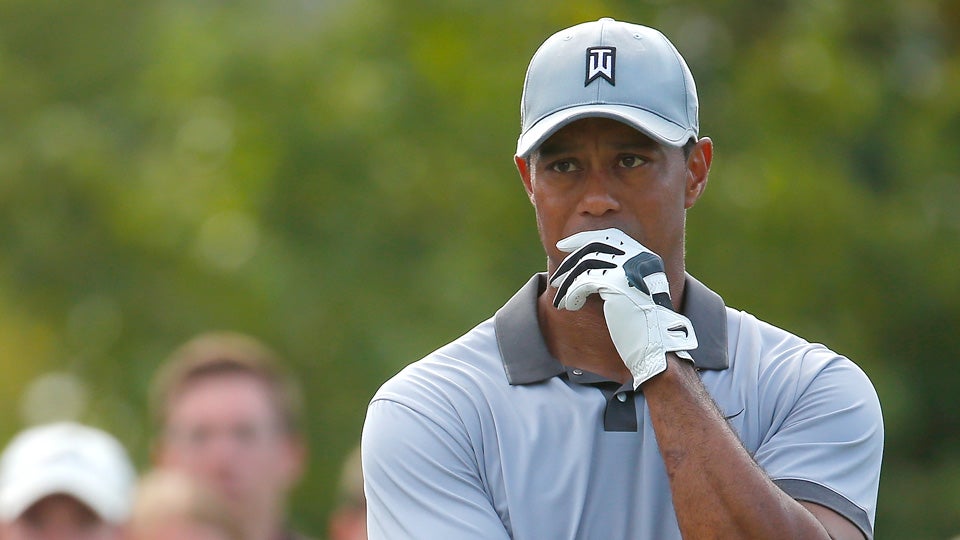 No one knows for sure when Tiger Woods will compete again, and that includes Woods. Still, there were indications earlier this month he wasn’t ready to retire.

Woods watched from a golf cart at the Hero World Challenge in the Bahamas. He also spent time in the TV booth, as he often does during his tournament. Woods might not always have a lot to offer in an interview, but he’s a natural talking about golf. He is so good in the booth that someone jokingly suggested perhaps he should replace Johnny Miller when he’s done playing.

”Talking about golf comes easy to me. I can do that all day,” he said. ”But I don’t want to sit around and watch golf up there. I want to be out here.”

The waiting game will continue into 2016, and who knows how much longer?

In the meantime, there were plenty of activity and anecdotes that went beyond Jordan Spieth’s two majors, the rise of the next generation and Woods’ future.

So much has been made of the high school class of 2011, and it came into focus during a practice round at the Valspar Championship at Innisbrook. Spieth joined Justin Thomas, Daniel Berger and Ollie Schniederjans for a (small) money game on the back nine.

Golf Channel wanted a shot of them all standing next to each other on the 11th hole, and one of them got the idea they should line up in order of their age. They were all 21 at the time. Spieth was in his third year on tour. Thomas and Berger were PGA Tour rookies. Schniederjans was still at Georgia Tech, playing that week on an exemption.

They started calling out their birthdays to get in the right order. The youngest of the bunch?

This was one week after he cleared $9 million in career earnings.

Unlike the PGA Tour’s clandestine policy of discipline, the European Tour will confirm when a player has been fined, even though it might not disclose the amount.

That much was evident when word surfaced at Doral that Rory McIlroy had hurled a 3-iron into the lake to the left of the eighth fairway in the Cadillac Championship. McIlroy is a member of both tours.

A few British journalists inquired about a fine, leading to a radio exchange between two European Tour officials working the event.

”Is throwing a club a fine?” came the query.

European Tour chief referee Andy McFee, sitting in a cart near the 11th hole, replied that it depended on the circumstances. A player who tossed his club in the direction of his golf bag, for example, might not be disciplined.

”In that case,” the other official said, ”it appears his bag would have to be at the bottom of the lake.”

Not long after Augusta National Golf Club opened, co-founder Clifford Roberts wanted members to wear their green jackets during the tournament so that they would be easily recognized as reliable sources of information for the patrons.

During the tournament, Augusta National member Geoff Yang (also working as a rules official) was in a cart to the right of the ninth fairway in his green jacket. About that time, a man approached and politely said to Yang, ”Can I ask you a question?”

OK, maybe this wasn’t what Roberts had in mind.

Spieth and Justin Leonard were on the putting green at the Memorial when Leonard mentioned he didn’t play the Byron Nelson Championship this year for the first time. This was a big deal. Leonard, among the prominent players to come out of Dallas, has never fared well at his hometown event.

Spieth was surprised and asked Leonard if he caught any grief.

”No. Because you played,” Leonard told the Masters champion. ”So thank you. I owe you dinner.”

Spieth smiled, slowly nodded and went back to work on his putting. Moments later, two representatives from a PGA Tour event approached Spieth to introduce themselves. Spieth stopped what he was doing to shake their hands, and the two men felt comfortable enough to keep talking. A few seconds turned into a few minutes.

Leonard, in his 22nd year on tour, saw what was going on and walked over Spieth.

”Hey, Jordan, I need to tell you something,” he said, placing his hand on Spieth’s shoulder.

The two representatives recognized the private moment, thanked Spieth for his time, said goodbye and walked away.

Leonard looked right at Spieth and said in a low voice, ”You’re welcome. And now we’re even.”

Wayne Gretzky was standing on a hill looking over the 18th green at Chambers Bay as he watched his future son-in-law, Dustin Johnson, go from a chance to win the U.S. Open to the most crushing loss of his career in a matter of three putts.

Johnson headed to Idaho with the Gretzky clan for a getaway. The next morning, Gretzky said he took a group out to play golf. On the second green, they looked behind to see a cart fast approaching. It was Johnson, who wanted to know why no one asked him to join the game.

Gretzky told this story in August, and it amazed him how much Johnson was able to move on from setbacks.

”I know this much,” Gretzky said. ”If I ever lost Game 7 of the Stanley Cup Finals, I wouldn’t want to skate with a bunch of amateurs the next day.”

Anirban Lahiri showed class and grace at the Presidents Cup, where he patiently took every question on a 3-foot putt he missed that cost his team a chance to win.

He is capable of frustration, too, and he showed that at the Hero World Challenge when he said, ”If my mom had putted, she would have shot 65.” The next day, he felt terrible about what he said (after making it clear that his mother doesn’t play golf) without making excuses.

”That’s probably the most embarrassing thing I’ve said in the media in my life,” he said. ”I pride myself in how I carry myself and what I say, and that’s nothing like I would like to come across as. Having said that, what’s said is said.”

How he presents himself was clear at ”India Night,” a party Hero Motor Corp. hosted at Albany. Lahiri dressed for the occasion – a red kurta and jobhburis, which are sandals he said can be found only in the northwest region of India.

”I have to thank my wife for that. She made sure I put it in my suitcase,” he said. ”Hero is very much part of the family, and it was important for me to represent.”

He gets to represent the PGA Tour next year, and it should be happy to have him.