A day in the life of a PGA Tour pro isn’t all fun and games. Ask Ben Crane. 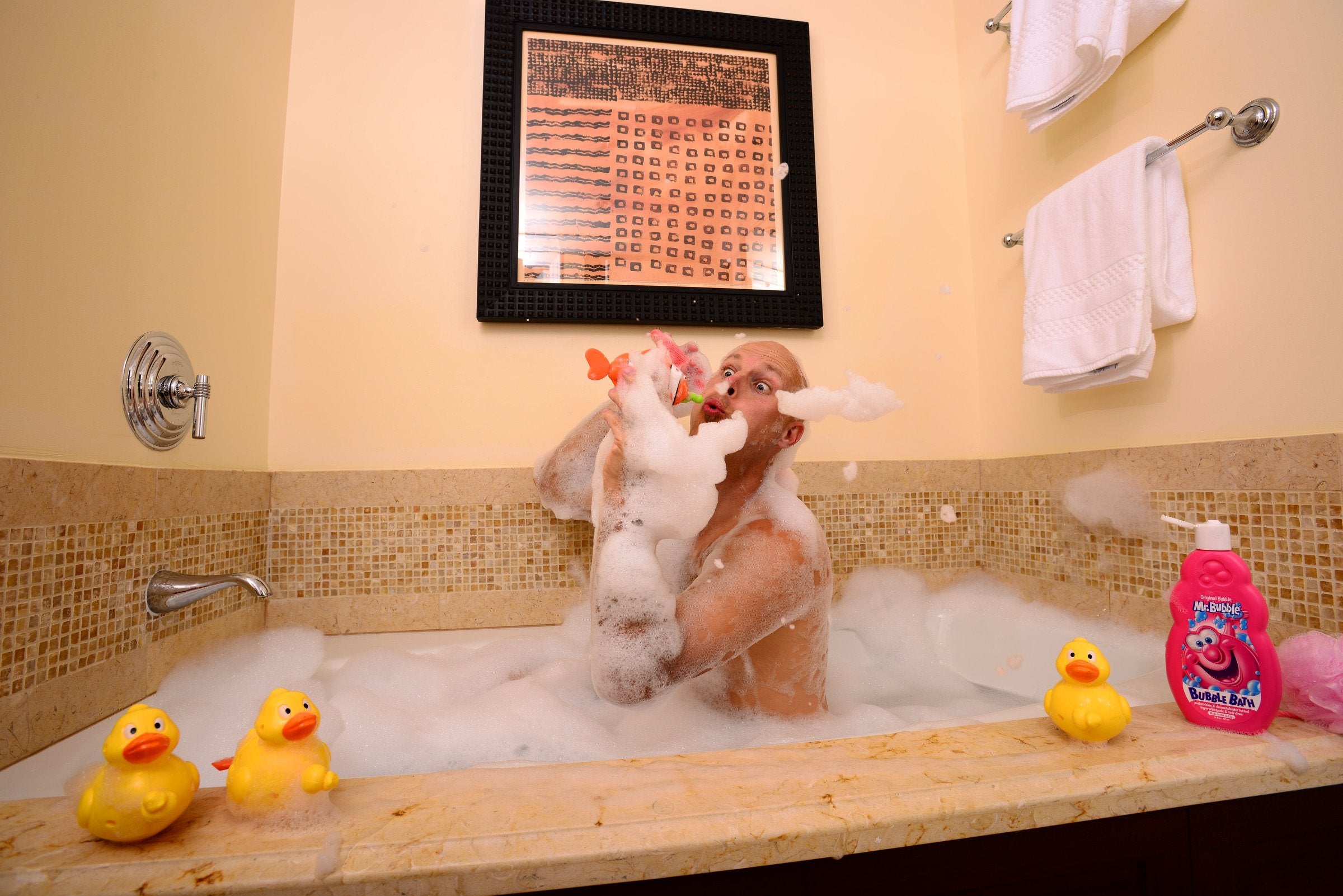 Ben Crane is one of the more colorful players on the PGA Tour, as evidenced by this 2015 photo shoot. Crane took us through a day in his life on Tour at the Honda Classic this week.
Kojhiro Kinno

PALM BEACH GARDENS, Fla. — On Thursday, Ben Crane woke up early to play the first round of the Honda Classic and the 1,162nd round of his PGA Tour career, which began in 2002. The pairing sheet, online and otherwise, showed he would be playing with Tyrone Van Aswegen and Whee Kim, but Ben Crane didn’t know that. He doesn’t look to see who his playing partners are. “I get better sleep not knowing,” he says. His longtime caddie, Joel Stock, a good player himself, just tells Crane the time and the tee — 7:05 a.m. on this day, 10th tee.

That meant that Crane set his iPhone for a 4 a.m. wakeup call, as Crane always wakes up three hours before his morning tee time. Which meant going to bed at 8 p.m. on Wednesday, because he always goes to bed eight hours before his wake-up time. Which meant wrapping up his Facetime reading session with his young son at home in Nashville — they are reading Chronicles of Narnia — before dad’s bedtime.

It also meant eating only half of the delicious zucchini-and-squash spaghetti dinner, with a turkey-based red sauce, prepared for him by his host for the week, fellow Tour player Cameron Tringale. Crane finds if his dinners are too big he cannot sleep, and sleep is a high priority in his life. He travels with his own pillow and seldom stays in hotels. At the Honda, he and Stock were staying in spare bedrooms in Tringale’s house, a five-minute drive from PGA National. As it happened, Tringale had a 7:05 a.m. tee time as well, but off the 1st. The coffee started brewing at 4:40 a.m.

Crane, a devout Christian, read and prayed until 4:25, then did about 25 minutes of stretching and exercises, getting his heart rate up to 140 beats per minute. (His routine is part of program called the Eldoa Method.) Joel came in to the bedroom at 4:40. They are both Oregonians and fans of University of Oregon basketball.

Crane got dressed for work: green Puma shirt (a new sponsor), white pants, size-31 waste. (The man’s fit.) “It’s really more of a Saturday afternoon outfit but I wanted to wear it on a Thursday morning,” he says later. “I know the other guys are going to be wearing black, because it’s early, it’s cool and it had rained hard the day before. They don’t want to get their pants dirty. But I want to stand out.”

The two golfers and the caddie ate scrambled eggs with avocado and sweet potatoes, prepared by Stock. Earlier, Crane had turned on “Break Every Chain” by Jesus Culture at the highest volume his portable Nixon speakers would permit.

The golfer and his caddie were in a tournament-issued Honda minivan by 5:30, with Crane’s bag in the back, with two sandwiches packed in it, one on regular bread, the other gluten-free. Crane has been experimenting with gluten-free cuisine. On the drive to the course, the morning still dark, caddie and player engaged in what they call they’re “daily devotional,” downloaded from a website. On this morning it was from Thessalonians: “Rejoice always, pray continually, give thanks in all circumstances.” They discussed its meanings. They’ve been working together for eight years.

Player and caddie started on the practice green, putting on chalk lines they had placed there earlier, situated by the scoreboard, knowing that the scoreboard lights would give them enough light by which to putt. They were “running their programs,” their regimented putting warm-up system. Wayne Burch, a Tour caddie, walked by and said, “I see, I see — first on the green.”

So far the day has been…normal.

Crane’s warm-up session on the range was nothing special, in terms of how he was hitting it, but mentally he felt sharp. He shifted into his “mental program,” by which he played the last four holes of the day — Nos. 6, 7, 8 and 9 — in his head. He could see it all clearly. That’s not an everyday thing. That was special. He also noted the sunrise. “Look at those colors,” Crane said to Stock. “Look at all that purple and blue.” Smelling the roses, Tour-style. He ended the session with some 40-yard hooks and 40-yard slices, as he always does. “I figure if I can curve it, I can hit it straight too,” he says.

On the 10th tee — his first — Crane finally learned who his playing partners would be. He also learned that the round would be played under lift, clean and place rules, because of the heavy Wednesday rains. Crane thought: Don’t swing hard. Ball-in-hand, length doesn’t matter on your approach shot, not off of a perfect lie. Just make sure you are playing from the fairway.

Crane is always trying to learn something. (They all are.) Lately, he has been trying what he calls the Matt Kuchar approach: Play the first few holes conservatively, see how you are hitting it, then either start playing more aggressively, or not, depending on how the day is going and how the swing is feeling.

After a par on 10, Crane was between clubs for his second shot into the par-4 11th, unsure whether to hit a hard 7 or to take something off a 6. He went with the latter. The shot ran off the green. But Crane was not concerned, not at all. He liked his thinking. He worries more about the quality of this thinking than the results of his shots.

Another thing he has realized over the years. Swing thoughts come and go. They are in circulation. At the moment, working with his putting coach, James Sieckmann, Crane is, as he has sometimes in the past, “blanking the ball.” That is placing it on the green in such a way so that he cannot see any marking when he stands over it. He’s trying not to overthink his putting. He was putting at the hole or into it all through the front nine. Not a single poor stroke or even close to it, and he went out in 31. Not that he knew that. He didn’t even know what par is for those nine holes. Par is 35 on each side.

On his 10th hole, Crane burned the lip on a 45-footer, and said, “Can you believe this? I cannot buy a putt!” His playing partners and the three caddies laughed. It was a joke. He was trying not to try too hard, and it was working.

Round No. 1,162 of his professional life, and he learned something. On the par-3 15th, he noticed that the grain on the tee was into him. The ball, well hit, came up about 30 feet short of where he wanted it to land. He said later, “I realized — for the first time! — you have to tee it up a little higher there or tee it behind an old divot. Because even though you’ve hit the ball before the ground, it’s like the grain still slows down your clubface.” Does science support that finding? It really doesn’t matter.

Asked about the one time he talked successfully to his ball in that Thursday round, when a tee shot bounced from the thick rough and into the playable first cut, Crane said, “I believe that physics and wind are in play. But it’s fun to talk to our ball.”

It’s not all fun and games out there.

Crane had his gluten-free sandwich on his front nine and his regular sandwich on the back. His stomach started grumbling. Coming off the 6th green, he needed a loo on an emergency basis. He found a port-a-john, struggled to figure out how to latch it, struggled more with the toilet paper dispenser and when he got to the par-3 7th tee (his 16th) he saw that his playing partners were already on the green, trying to keep the round moving. Crane, who has been saddled with a reputation for slow play although it may no longer be fair, hit a tee shot into a bunker, got up and down from it and was told by a young Tour rules official coming off the green that his group was now on the clock. Crane blames the bread.

“Buddy, we’ve been waiting all day,” he said. “I just had a bit of trouble in the bathroom. Could you reconsider?”

The answer was not clear, but Crane got to the 9th tee, his last of the day, while his playing partners were putting out on 8, just to keep play moving.

A perfect round of golf on the PGA Tour is not 59, or even 58. Those are freak shows. It is not Hogan’s mythical 19 — 17 straight aces and a lip out on the last, in his recurring dream. It is not hitting every last shot dead solid perfect because that is almost impossible to do over 18 holes. But playing a bogey-free round, that’s always a goal. Tiger Woods and Ben Crane and every other Tour player will tell you: The 10-footer you make for par means more than the 10-footer you made for birdie. There may not be a logical basis for that, as they all count the same, but it’s the truth.

Through 17 holes, Ben Crane had made five birdies and no bogeys. He was only aware of the latter part. He did not, for even a second, have the thought of, “Don’t bogey the last.” His thought on the 420-yard par-4 was: Hit a 3-wood in the fairway and if you’re going to miss the approach, miss it on the left, because you have an easy uphill chip shot from there.

He drove it in play. He said hello to fellow Oregonian Peter Jacobsen, the former Tour player and now an NBC broadcaster, who was watching from a cart. They saluted their basketball team. Crane then proceeded to miss it left. He was fine with it. But then he misread the lie on his chip shot. “I made the swing I wanted to make with the club I wanted to make, but I thought the ball was sitting up more than it was and I got too much grass between the ball and the clubface and the shot went nowhere,” he said later. He stiffed the next and tapped in for bogey. Was he upset with a bogey on the last. “Not at all. I thought through the shot well.” As you know: He tries not to be too results-oriented. Some days that’s easier said than done.

Four under for the day. The 66 would leave him two shots out of the lead at day’s end. It was high noon. He answered questions from reporters in his genial manner for 10 or so minutes. Burch passed him again and said: “I get it, I get it. First on the green.” Ben Crane and Joel Stock smiled.

They began their preparations to do it all again next day. Round number 1,163 was around the corner.