AUGUSTA, Ga. – There is a Spanish phrase for a man who believes he is especially unlucky: “Sergio Garcia.” If you have followed Sergio at all through the years, then when you saw him approaching the first green at Augusta National Friday, you could imagine what was going through his head: “What a beautiful, cloudless day. Well, so there is one tiny cloud. Two. Three? This is how rain starts. Did I leave my car windows open? What if it hails? I might die here.”

That’s the Garcia we know and love and occasionally mock. But the guy here this week looks different. He looks and sounds like he can finally win his first major championship – and he knows it.

Garcia has often acted like he believes Bobby Jones’s will included a line about never giving a green jacket to anybody named Sergio. Five years ago, after another frustrating Masters finish, Garcia said, “I’ve been trying for 13 years and I don’t feel capable of winning. I’m not good enough for the majors. That’s it.” The worst part was that nobody was surprised he said it. It was Sergio being Sergio. Well, if you want to believe that people can fundamentally change, Sergio Garcia is your man for the weekend. He birdied the first three holes here Friday and shot 69, putting him at four under for the tournament, tied for the lead. But most impressive was how he did it – and what he said afterward.

Garcia walked into the interview room in the comically luxurious new media center, or as Billy Payne and I call it: my new home. He cracked: “Are you guys comfortable?” Then he looked extremely comfortable. He went through his round and said, “I knew at some point, bogeys were going to come,” but that he didn’t let it bother him. 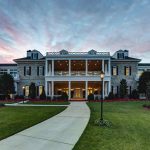 You may also like Only Augusta would open the world’s most luxurious media center, because why not?

And: “I’m working on trying to accept things … which can happen here and can happen anywhere. It’s part of golf.”

He had played like he meant all of it. The wind played mind tricks all day – one of Garcia’s playing partners, Lee Westwood, said it was “changing direction a little bit, which is hard out here, because you’ve got to be so precise.” On the fourth tee, after tossing a ball to a kid, Garcia left his tee shot well short of the green, apparently because the wind changed. He was unfazed and made par.

On the par-5 13th, he thought he hit a “beautiful second shot,” but it went over the flag, leaving him with a chip that was no fun at all. He made bogey, but he said afterward: “You’ve just got to realize that those things are going to happen, and if you manage to do that, then you can come out here and compete and have a chance.” 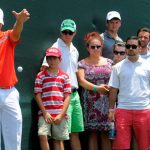 On 12, Garcia hit “hands down, the best bunker shot I’ve ever hit,” out of a plugged lie, and he leaned backward when it missed the hole. Then the real strangeness began: The leaderboard changed his bogey 5 on the 10th to a triple-bogey seven. To a gallery that (of course) is not allowed to carry cell phones, it was confusing. Was Garcia assessed a penalty? Nope: Somebody mistook Garcia for one of his playing partners, Shane Lowry. The third man in their group, Lee Westwood, had a simple and sensible explanation: “We (were) all dressed in the same colors, weren’t we?” It was true. Westwood, Lowry and Garcia were all wearing blue sweaters and light pants.

The scorer wasn’t the only one who was confused. In Garcia’s press conference, I kept thinking he was Jordan Spieth. Or Rory McIlroy. He sounded like he finally understood that the cruelness of golf is random, and it hits everybody, so why worry about it?

Yes, as Garcia pointed out himself: It was only Friday. But if Garcia really gets it now, watch out. He may finally win the majors so many expected him to win.

He has had a strange career, both wildly successful and disappointing, and it’s not really right to say he can’t handle the big moments. He is one of the great Ryder Cup players ever, and the Ryder Cup is a tension geyser.

One possible explanation: Garcia is better suited for team events, where his suspicions about personal doom do not apply. The golf gods hate him, not all of Europe. So he can put the demons aside and concentrate on winning. What if he does that here this weekend?

Garcia has been haunted, in a way, by the 1999 PGA at Medinah, when he hit a shot from behind a tree with his eyes closed and looked like exactly what he was: an incredibly talented and charismatic 19-year-old who thought he could beat Tiger Woods. He bounded around the course and it looked like one of the best rivalries in sports was taking off. Maybe if he had won that day, he would have won the career grand slam by now. Instead, he has played with a greater burden every year.

The burden could have destroyed him, but it hasn’t. Westwood says: “He’s always been a good player. I haven’t seen him change much. His game looks the same as it did when he was a 19-year-old. He doesn’t run around and bounce quite as much. But that’s probably an age thing.”

Westwood understands the burden – he, too, has been one of the best players of his generation but hasn’t won a major. But Westwood is 43, and if he were going to win a major, he probably would have done so by now. Garcia is 37. He has time. Maybe this will be the weekend that changes how we view him forever.

Garcia seems to be shifting toward optimism. Before Garcia finished his press conference and got a tour of the media center (seriously), he answered yet another question about changing with a joke: “You guys don’t like me? You want me to change?”

Nobody wants him to change that much. He’s too entertaining. We just want to see Ryder Cup Sergio on the back nine of Augusta on Sunday. How much fun would that be?