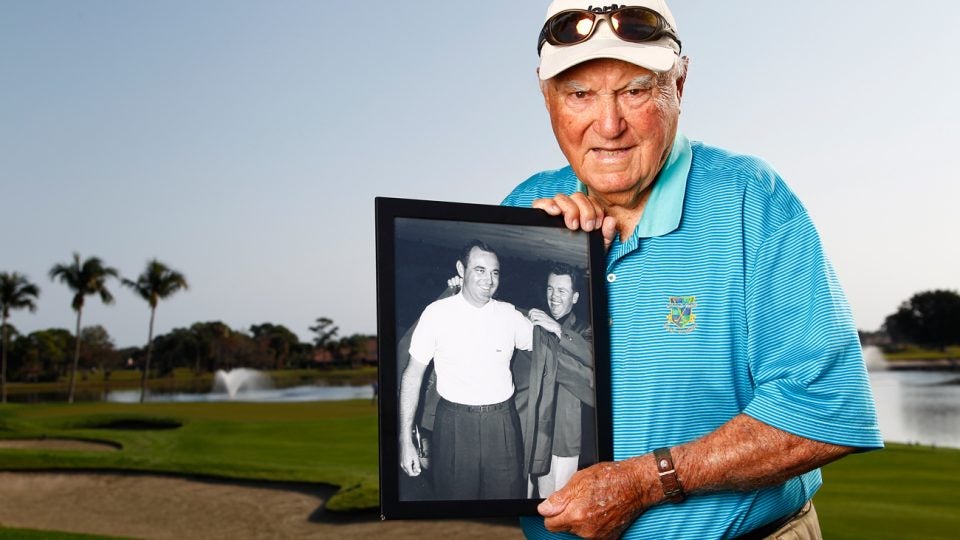 Doug Ford won the 1957 Masters, and very nearly repeated the following year during a controversial Sunday in 1958.
Angus Murray

This year marks the 60th anniversary of your 1957 Masters win. Does it feel like 60 years have gone by?

What do you remember most about that week?

The shot that I hit [on Sunday] at 18, when I holed it out of the trap. I was plugged, oh, 10 feet from the hole. If I exploded out at the hole, the ball would have run off the green. That green slants pretty good, so I exploded it into the bank and it came back and into the hole.

How did you react?

I lost my hat! I couldn’t find my hat. I had thrown it up in the air, I guess. Anyhow, it was a shot I’ll always remember.

You played very aggressively on the back nine. Why?

The year before, I was leading going into the back nine and shot a bad nine. It was a tough playing day, and I shot a 42 or something. I shot a 32 the year I won.

Sam Snead was the runner-up. Was it extra special to win over such a decorated player?

It was always great to beat him, because I’ve always said he was the greatest player I ever saw. In fact, I was one group in front of him in the last round, and I had a two-shot lead going to the 18th hole. He still had to play 17 and 18, which he could have birdied. So once my ball went into the hole [for birdie] on 18, he was finished. I most likely played more rounds for money against Sam Snead at the Masters than anyone. We gambled all the time.

Did Snead pay you right away when he lost?

When you beat him, you got paid off in the locker room. But if he beat you, he wanted to get paid on the green.

In 1958, you finished tied for second, a shot behind Arnold Palmer, after a controversial rules decision saved Palmer two strokes. You came very close to back-to-back Masters titles.

Going into the 13th hole, when they changed [Palmer’s] score from a 5 to a 3 on the 12th hole, it changed my thinking. But what happened, happened.

Do you remember what you served for your Masters Champions dinner in “58?

You had two or three things on the menu, but I went for the steak.

How do you spend your time at Augusta these days?

I go every year and watch it on the big board on 18. I listen to the radio in the locker room. They shoot some scores there nowadays that are unreal. And as much as I can move around, I move around.