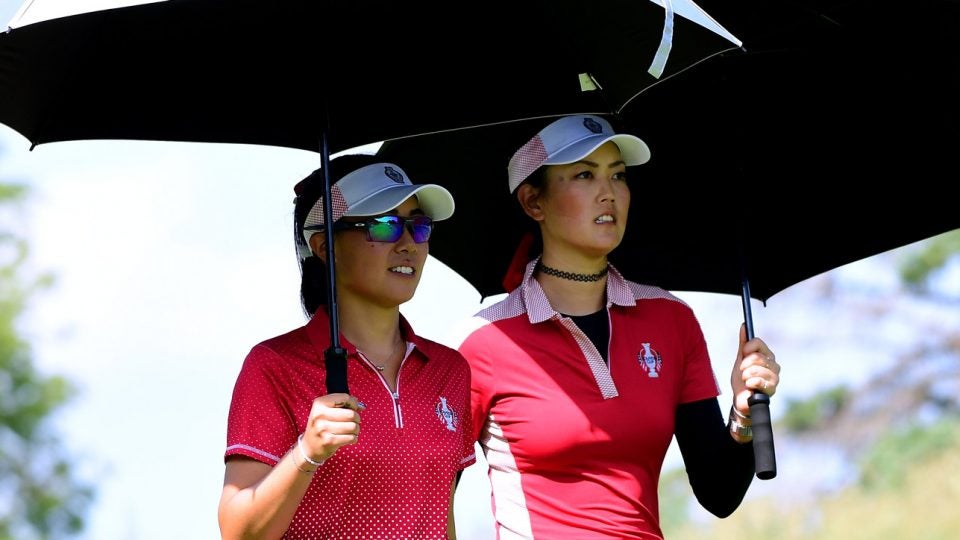 Team USA leads Europe by a score of 5.5 to 2.5 after the first day of competition at the 2017 Solheim Cup.
Harry How/Getty

By late Friday in Des Moines, the scoreboard turned star spangled, as Team USA surged into a 5 1/2 – 2 1/2 lead over the Europeans in the 2017 Solheim Cup. A lot of golf remains, though, and many questions linger. Here are five we’re mulling over heading into Saturday’s play.

1. More Fireworks on the First?

At 307 yards, the opening hole at Des Moines Golf and Country Club is designed for drama, and it did its job on Friday as Lexi Thompson drove the green with her team’s first tee shot of the day. Thompson’s titanic three-wood sent the crowd into a frenzy. It also set the stage for a dogfight of a match that ended in a halve between Thompson and her partner, Christie Kerr, and the European duo of Mel Reid and Charley Hull. So the first hole was a harbinger. On Saturday morning, will it once more be a sign of exciting things to come?

During Friday afternoon’s four-ball session, one of the matches wasn’t matchy-matchy. That’s because Michelle Wie mistakenly wore the team shirt intended for Friday morning play. Despite their clashing fashion, Wie and her partner Danielle Kang still came out on top against Madelene Sagstrom and Jodi Ewart Shadoff. Now that she’s won a full point, can Wie get her entire outfit right?

In the Solheim Cup, as in the Ryder Cup, it’s widely seen as a wise strategy to get all your players onto the course during the opening two sessions. And on Friday, both captains accomplished that. So everyone played. But not everyone played well. Will those who struggled (Europe’s Florentyna Parker comes to mind) get a second chance on Saturday?

5. Is this a pattern for the red, white and blue?

In recent decades of Ryder Cup action, the American men have earned a reputation for thriving in the play-your-own-ball four-ball format while struggling in alternate shot. One look at Friday’s lopsided scoreboard makes you wonder: will that pattern apply to the women this year, too?