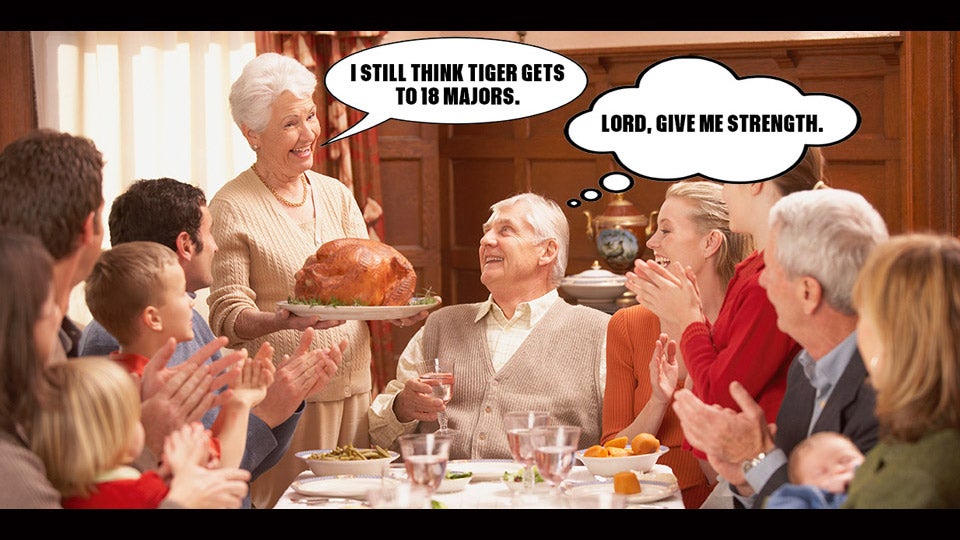 Forget religion, politics and why your brother hasn’t proposed to his girlfriend of nine years. If there are golfers at your Thanksgiving Day dinner table, the most cringe-inducing conversations you’ll encounter might well revolve around golf. But rest easy — when Uncle Clyde drops a scalding-hot Tiger take or your 13-handicap neighbor declares he could play on the Champions tour, we’ve got you covered. Here’s how to keep your dinner mates in check without spoiling the party.

Your brother, who you’ve never seen break 90, announces to the table that he shot “a legit” 79 a couple of weeks ago. (“With three doubles!”) You want to believe him but you’ve played hundreds of rounds with him and deep down you know the turkey carcass in the kitchen would have a better chance of breaking 80.

HOW TO RESPOND: Resist the urge to spit-take. No one wants to see regurgitated gravy on the tablecloth. When the initial rush of skepticism and indignation subsides, coolly congratulate your bro and say something like, “Well, I guess that means you’ll be giving me five a side next time out.” Later, over cigars, give him what he deserves: a glass of scotch over the head.

Uncle Clyde declares Tiger will win “at least a couple of more majors.” A stunned silence falls over the table. Clyde takes a big, sloppy swig of his martini, puts down his glass, and adds: “And by a couple, I mean five or six. Jack’s record is going down. I mean, it’s not like the guy has forgotten how to play golf. The greatness is still in there.” HOW TO RESPOND: Clyde seems to have forgotten that Tiger hasn’t won a major in nearly nine years (or a PGA Tour event in more than three years). The last guy to win major titles nine years apart? Gene Sarazen, 84 years ago. That was two decades before Clyde was born. You could present Clyde with the inalienable facts but Tiger loyalists don’t respond well to logic or reason. To them, 2000 Tiger and 2016 Tiger are the same guy, just with a slightly different hairline. Instead, goad Clyde into putting his money where his mouth is — bet him $20, $100, your mortgage, that Tiger won’t sniff Jack’s record. It’s a win-win: Clyde will feel good his allegiance to “T-dubs,” you’ll feel good about making some easy cash.

Your neighbor, Terry, says she read on Facebook that Donald Trump will be the greatest presidential golfer of all time — “and it’s not even close.” (Source: Trump’s Facebook page.)

HOW TO RESPOND: To be fair, it’s not all that outrageous a claim. Trump does have some game, but it’s hard to know precisely how much game. He carries a stellar 3 handicap but he has a reputation for having an open relationship with the rules. “When it comes to cheating, [Trump] is 11 on a scale of 1 to 10,” Rick Reilly wrote in Who’s Your Caddy? Tread carefully here. Any dig at Trump’s golf skills will inevitably trigger a broader political debate, which is unlikely to end well. Remind Terry that several other commanders in chief were also pretty decent sticks, led by JFK, who had a sweet swing and regularly broke 80. Then muster your best Trump voice and crack a “You’re fired!” joke. Everyone will laugh, diffusing any lingering tension.

Terry’s husband, Frank, an excitable 13 handicap, says he could “easily” qualify for the Champions tour. “Give me a year to practice and some decent clubs, and I could totally play with those old guys.”

HOW TO RESPOND: Everyone has a friend like Frank: The aging ex-jock who’s convinced he could master just about any sport if given time to hone his skills. But Frank’s self-delusion is at another level — last Thanksgiving he claimed he had a better arm than Eli Manning. This is the rare scenario where the claimant needs to be swiftly put back in his place, whatever the cost. Begin by tapping your fork on your wine glass as if you’re preparing to make a toast. When you have the table’s attention, announce that Frank is a dumbass who could only break 100 at a Champions tour event if they gave him five blows aside. Frank will grow red-faced and agitated. Just as he’s about to storm out of the room, put a hand on his shoulder, smile warmly and tell him you’re just kidding: He’d actually need seven aside.

Grandpa Wilson proclaims that golf was much harder in his day, and not just because he had to walk eight miles uphill to and from his local muni. “The game was just harder, dammit.”

HOW TO RESPOND: Well, yeah, persimmon woods and butter-knife-sized blades were less forgiving than the today’s super-charged clubs, but modern courses are also longer and tougher. Look at the last decade alone: On the PGA Tour the average course setup in 2003 was 7,207 yards, according to Golf Predictor. By 2014, that number had jumped to 7,296 yards — an increase of nearly 90 yards in just 11 years. No, the pros aren’t playing with gutta-percha but they’re not playing 6,000-yard set-ups with shaggy greens, either. At the weekend hacker level, the average handicap has crept down a couple of strokes in the last 15 years, according to a recent study, but with so many vanity handicaps out there, it’s hard to put too much stock in that stat. Are you any better than you were 15 years ago? Golf is hard. It was in 1850. And 1950. And it still is today. More pumpkin pie, grandpa?