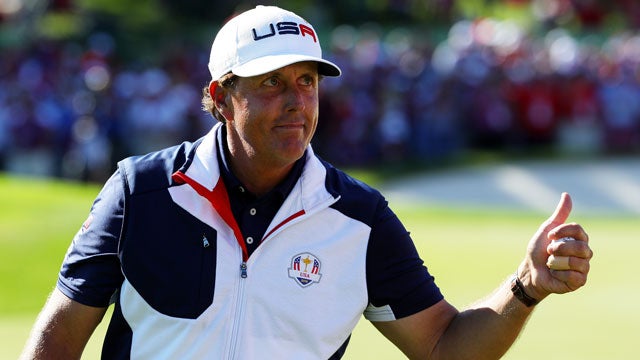 Here at GOLF.com, we put together a list of the 25 most popular stories of the year. Faithful readers like you flooded our website to read them, so here they are one more time as we drumroll to the 2016 calendar year and what should be another riveting season on Tour.

Without further ado — and in no specific order — here are the 25 can’t miss stories from the past year.

Cheyenne Woods was recruited by her uncle, Earl Woods, at age 4.

David Feherty left CBS, and we can’t wait to follow his new adventures.

Phil Mickelson used the wrong ball at the Presidents Cup and looked silly. Keegan Bradley and Miguel Angel Jimenez got into a heated argument at the WGC-Cadillac Match Play.

SI Swimsuit model Hannah Davis isn’t very good at golf, but she tried it anyway and that’s OK with us. Dustin Johnson says he has a new outlook on life.

This is the hottest putting tip around. (We know, because thousands of you clicked on it.)

Anthony Kim still hasn’t returned to golf, but we would welcome him back with open arms.

Tiger Woods opened up about golf and his life in a rare TIME interview. One of our writers says that all of Tiger’s struggles lead back to his infamous sex scandal.

Jordan Spieth bought a Dallas mansion and it looks fantastic.

This is a modern fix for that dreaded pull shot.

You don’t need to go to the Masters to make its famous Pimento Cheese Sandwich — here’s how. Robert Allenby said he was robbed and kidnapped in Hawaii, or something.

Miguel Angel Jimenez is the most interesting man in golf. This awesome Q&A proves it. Alligators and pythons DO NOT like each other, and they battled it out on this golf course. Here is how you can cut your handicap in half in 30 days.

Jordan Spieth, continuing to prove he can do no wrong, wrote a letter to the family that helped with his tuition. One slice cure is better than the others. You are welcome.

President Obama can crash weddings at Torrey Pines because he is the president.