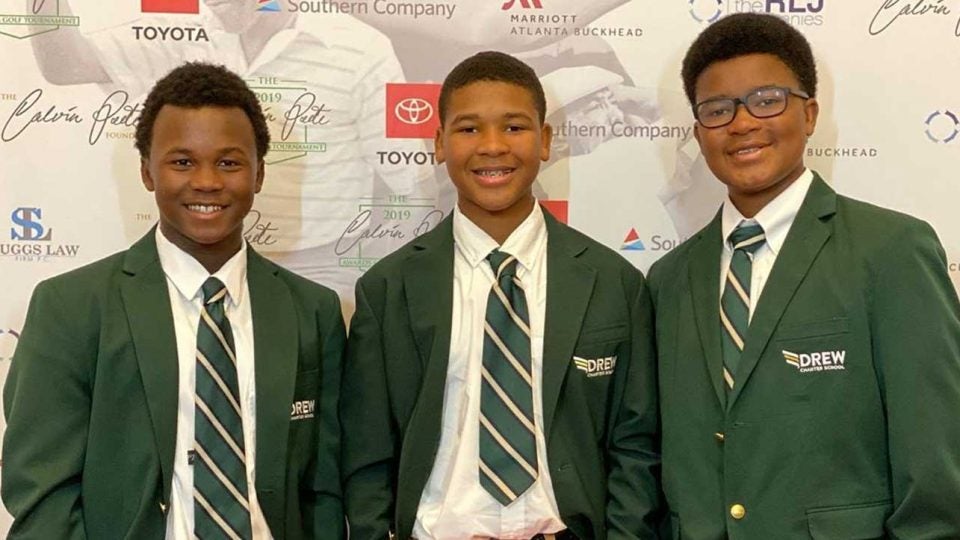 Back in the spring, the Drew Charter men’s golf team from Atlanta won the Class A Public State Championship in golf, lapping their competition to take home the trophy.

Their win was especially notable for two reason. First, they are the first Atlanta Public School to capture the state title. Second, they’re the first all-black team and coaching staff to earn top honors in the state of Georgia.

Now, a PGA Tour veteran who took notice of their triumph is jumping in to support their continued success. On Tuesday, Harold Varner III tweeted to congratulate the team and call attention to their accomplishment. In addition, Varner announced a donation of $5,000 to the school’s golf program.

“Congratulations to Drew Charter on winning their Georgia HS State Championship,” Varner wrote on Twitter. “These guys were the first All Black Golf Team to win a high school golf state championship. With that said, I would like to announce that the HV3 Foundation will be donating $5k to their program.”

Congratulations to Drew Charter on winning their Georgia HS State Championship. These guys were the first All Black Golf Team to win a high school golf state championship. With that said, I would like to announce that the HV3 Foundation will be donating $5k to their program. pic.twitter.com/2XpYTBKIpq

The donation was made by Varner’s HV3 Foundation. According to the official website, Varner started the foundation ” in an effort to give back to less fortunate kids that could greatly benefit from increased access and opportunity in sport.” The foundation aims to “bring awareness to the rising cost of entry and access in sports,” by providing “financial assistance for equipment, after school programs, instruction, camps, and various other avenues where an athlete can cultivate his/her passion.”

He couldn’t have found a better group to support than the student-athletes on the Drew Charter golf team. To win the state title, Drew Charter defeated the two-time defending champions by an incredible 15 strokes.

The team is led by former pro golfer Nyre Williams. Williams is also the director of the The First Tee of East Lake Foundation, which is where all the players got their start in the game.

Nyre told Blavity.com that the most important part of his job is “the capacity to teach these men things they wouldn’t have an opportunity to learn outside of the game. This platform has allowed them to recognize their worth and aspire to goals they wouldn’t have otherwise thought of accomplishing.”

News
In an age of tricky race relations, we need more Harold Varners

If you would like to make your own donation to Varner’s HV3 Foundation, head over to the official site here.