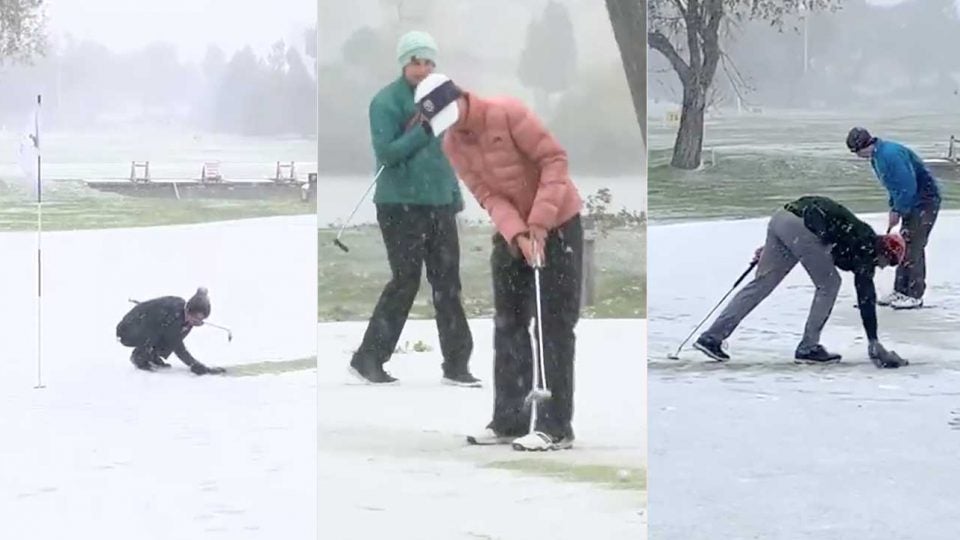 Players do their best to figure out how to beat the snow during the Montana state golf competition.
@richard_ecke Twitter / @WylieTom Twitter

Imagine being a high-schooler and trying to overcome your nerves — not to mention pressure from teammates, coaches and parents — and play well enough at your state meet to bring home a trophy for your school. And then imagine having to putt through snow. Seriously.

That’s what happened at the Montana Class AA State Golf Championships at Meadow Lark Country Club on Tuesday in Great Falls, about 90 miles north of Helena.

According to 406 MT Sports it started snowing when players hit the back nine, yet it did little to slow the winning team. Bozeman won its second straight boys title and all four counting scores matched or improved their 18-hole score from the previous day, and the girls team also won a state title on Tuesday, its fourth in a row. The school posed for photos afterward as the snow accumulated under their feet — they had finished just in time.

Travel
Swilcan Brrridge: See the Old Course at St. Andrews (and Carnoustie, too!) under a fresh coat of snow

The videos that circulated on Twitter showed players frantically wiping the greens with towels to give them a putting line, and some players elected to used wedges instead of putters to bypass some of the snow. Cooper Knarr, who shot 78 and was the girls’ individual runner-up, said the snow didn’t bother her until it was time to putt.

“Honestly, my ball flight wasn’t affected that much by the snow,” she told 406 MT Sports. “I stuck with what I was doing well, but putting was a struggle, just because of the slowness of the greens once the snow came down.”

“Pretty much everything gets harder,” Butte senior Kaven Noctor said. “Speed of greens, distance control, everything is a lot harder. I used to practice early in the spring in case this happened at state, but it is what it is.”

Check out a few tweets from the snowy action below.

Here's a look at the adventurous final hole for eventual champion Carrie Carpenter of Billings West. She said yesterday was the windiest round she's played, today was the snowiest. That's the Great Falls fall sports experience in a nutshell. #mtscores pic.twitter.com/FB0xUhTQiZ

Might have been even wilder for the boys leaders who finished about 15 minutes later. Here's Bozeman's Justus Verge playing his final hole. #mtscores pic.twitter.com/ahTY5xcgDa