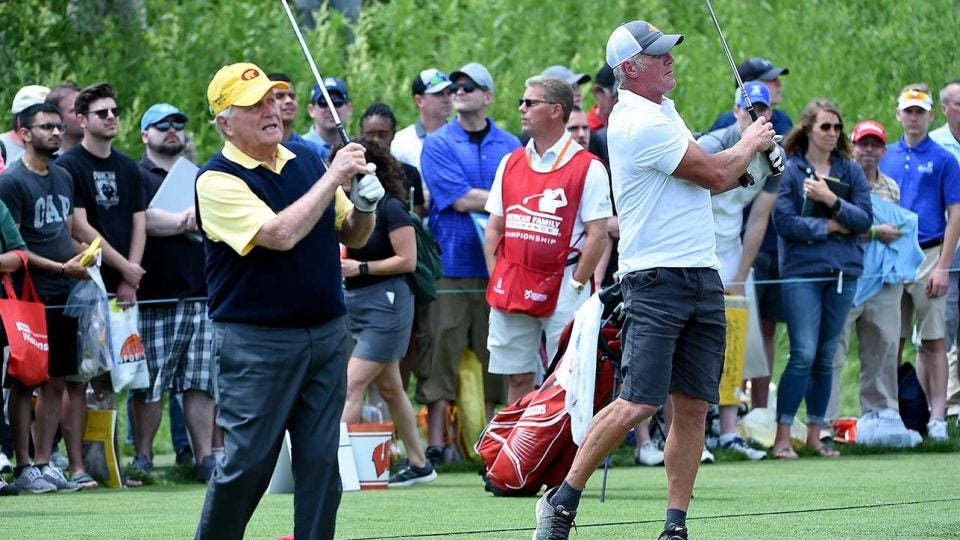 Jack Nicklaus and Brett Favre hit golf balls on the range together at the American Family Insurance Championship.
Getty Images

It’s rare for Brett Favre to take a backseat to anyone in the state of Wisconsin. But then came Jack Nicklaus.

Favre, a Hall-of-Famer and 11-time Pro Bowler, played in the PGA Tour Champions’ fourth annual American Family Insurance Championship at University Ridge Golf Course in Madison, Wisc., this week, and he of course was one of the top celebrity draws. But Favre wasn’t alone. He was in a star-studded foursome that included two-time U.S. Open champ and Wisconsin native Andy North, country music star Toby Keith and the 18-time major champ Nicklaus.

Favre told reporters exactly what it was like playing with The Golden Bear.

“The only way I can describe it is being a priest and serving mass with the Pope,” Favre said. “It’s got to be a thrill to do that. I’m obviously not a golfer. I’m a Sunday golfer, like most of us. This is an extreme honor.”

Tournament director Nate Pokrass told the Wisconsin State Journal that ticket sales exploded when it was announced Nicklaus would play. He last played an event in Wisconsin at the 1985 Greater Milwaukee Open.

“Things like this, what it does, it keeps me involved in the game of golf,” Nicklaus told reporters. “It allows me just to see the guys again, which I don’t see very often. It allows me to have a little bit of fun. Don’t have to keep a score.”

Jerry Kelly, who is also a Wisconsinite, won his hometown event by beating Retief Goosen and another Wisconsin native, Steve Stricker, in a playoff.