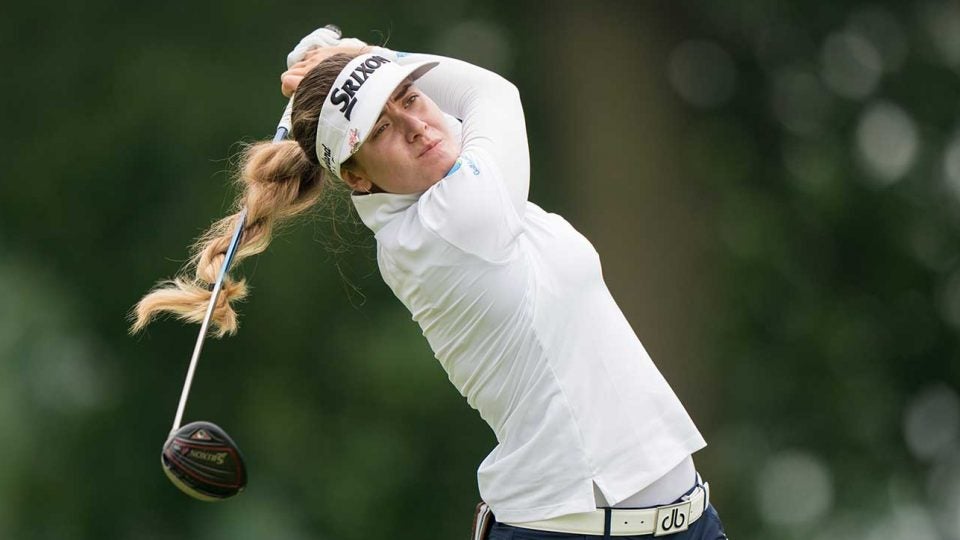 Hannah Green hits a shot during the final round of the KPMG Women's PGA Championship on Sunday.
Getty Images

Hannah Green needed a clutch sand save on the 72nd hole to win the KPMG Women’s PGA Championship for her first LPGA victory and major, and she delivered.

Green made a gritty par on the 18th hole at Hazeltine National in Chaska, Minn., to hold off defending champ S.H. Park and take home the $577,500 winner’s check. Green closed with an even-par 72 on Sunday to finish nine under overall. Park was second at eight under.

Green, a 22-year-old Australian, led by one to begin the day, but a handful of women jumped into contention during Sunday’s final round. One of them was Mel Reid, who shot 66 earlier in the day to take the clubhouse lead at six under, but Green gave herself a two-shot lead with two to play when she rolled in a birdie putt on the 16th hole to get to nine under.

Her lead was still two when she stood in the 18th fairway of Hazeltine’s difficult par-4 18th finishing hole, but as she waited for the group ahead to clear she heard the gallery roar when Park made birdie to shoot 68 and cut the lead to one. One swing later, from 182 yards into the wind, Green missed the green and was short-sided in the bunker. But needing to get up and down to win, Green blasted out to about eight feet and made her par to win.

Reid, Nelly Korda and Lizette Salas tied for third at six under.