2016 Year in Golf Awards: Putting a Bow on Our Favorite Memories 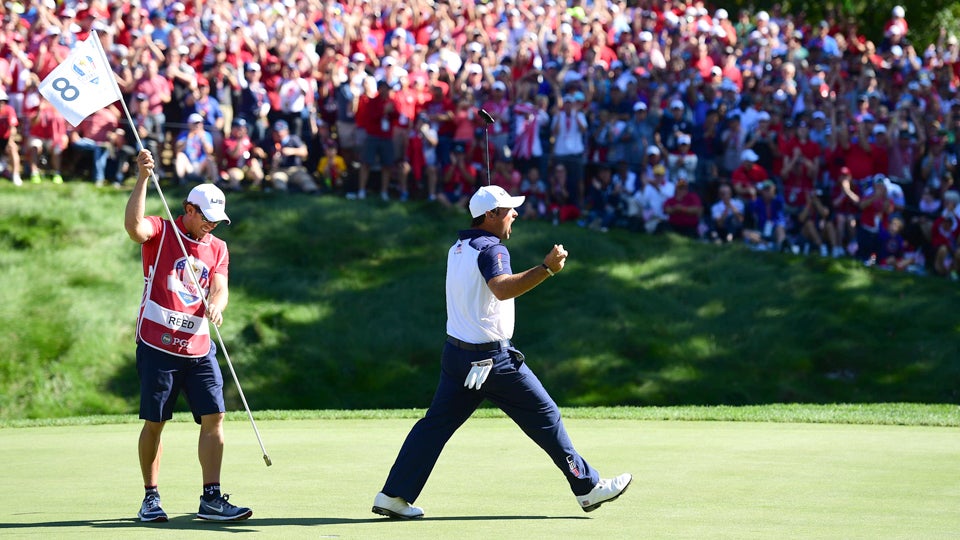 Well, that was quite a year.

Tiger returned. Se Ri Pak retired. The King moved on to another realm.

But rather than rehash the past 12 months in headlines, we’ve bundled up our favorite memories in holiday wrapping and tied them with a bow. Here they are, a gift from us to you: our Annual Year-End Awards in Golf.

For shattering the PGA Tour’s single-round scoring record with a 58 on Sunday at the Travelers Championship, three months after turning 46.

THE ALI-FRAZIER AWARD FOR MOST RIVETING SINGLES MATCH

For going toe-to-toe in a rock-em, sock-em Ryder Cup singles bout that featured more body blows than a Don King production and ended with Reed’s knockout birdie punch on 18. THE GARRETT MORRIS GOLF FOR THE HEARING-IMPAIRED AWARD

For cupping his hand to his ear while mouthing “I can’t hear you!” in defiance of the partisan Ryder Cup crowd at Hazeltine.

THE CAPTAIN GOES DOWN WITH HIS (FRIEND)SHIP AWARD

For selecting the struggling Lee Westwood, his longtime pal, as one of his four Ryder Cup captain’s picks, then watching his buddy lose all three of his matches.

For his grin-and-bear-it role as defending champ at Augusta, where he gamely helped Danny Willett don the green jacket that had so narrowly escaped his grasp.

For making more birdies—but also more double bogeys—than any player in the field at the Hero World Challenge, in a feast-or-famine return to competition that featured both a sizzling 65 and a tournament-worst round of 76. For his snappy retort to Bubba Watson, who, having found the trees with an errant tee shot on the 10th hole at Augusta, asked for breathing room while telling patrons “Can you back up? You’re really not supposed to be in here.” The reply: “Neither is your ball.“

THE LENNY BRUCE AWARD FOR BEST PUTT BY A HECKLER

For backing up his smack-talk from the gallery at Hazeltine, where European players pulled him from the crowd and challenged him to drain the same practice-round putt that Johnson had been razzing them for missing.

For telling ESPN that he loves Tiger Woods so much that he didn’t have the heart to tell him, “You’re not gonna be great again,” proving, with that headline-grabbing revelation, that he had the heart to tell Tiger, after all.

For capturing not only Feherty’s Northern Irish lilt but also his knack for colorful phrasing (“He’s more hammered than his drive”) while narrating the on-course action of a spring break getaway, using a tropical fruit as his microphone.

For their social media-friendly, bare-chested shenanigans in the Bahamas, which gave us all a glimpse of the good times they were having while helping us erase the disturbing memory from a few years back of John Daly playing shirtless in his jeans. THE PHIL MICKELSON AWARD FOR MOST IMAGINATIVE SHOT

For his unconventional recovery on the par-five 18th hole at Torrey Pines, where he played his second shot with the toe of his hybrid while standing on the asphalt on the wrong side of a boundary fence.

THE CARPE DIEM AWARD FOR SEIZING THE MOMENT

For acing the 81-yard first hole at the grand opening of the Playgrounds at Bluejack National in Texas, while playing in the same group as course designer Tiger Woods.

For their star turn in a SportsCenter ad in which the pair engage in player-caddy conversation over how to best attack a plate of mac-n-cheese. Example: “That cheese looks a little saucy. I’d go with the spoon.”

For playing through shoulder pain—and a lot of tears—in a farewell round in South Korea, closing out a Hall of Fame career that included five major titles and left an indelible mark on the women’s game.

THE DALE CARNEGIE AWARD FOR WINNING FRIENDS AND INFLUENCING PEOPLE

For penning a tongue-in-cheek takedown of American golf fans just prior to the start of the Ryder Cup (“pudgy” “brainless” and “obnoxious” were a few of his descriptors) ensuring that his brother, Danny, would incur the wrath of an unforgiving Minnesota crowd.

THE BIRDMAN OF ALCATRAZ AWARD FOR GETTING OFF THE ROCKS

For escaping from the craggy outcrops around an island green on a hole aptly known as Alcatraz, then making off with the title at the Career Builder Challenge for his first tour win in three years. THE DA VINCI CODE AWARD FOR MOST INSCRUTABLE LOGO

For a three-triangle design that, according to Woods, is meant to simultaneously invoke the W in his name, a tiger’s paw and stripes, and a trio of trees but which, to the casual observer, looks a lot more like . . . three triangles.

THE BEST ATTEMPT TO UNDERMINE THE OPPOSITION AWARD

Winner: One and half year-old Tatum Johnson

For toddling off with Jordan Spieth’s putter on the practice green at Pebble while his father, Dustin Johnson, looked on.

THE MACGYVER AWARD FOR INNOVATION

For two straight weeks — at both the Scottish and British Open — Phil Mickelson used a binder clip to keep his hat on in poor weather conditions. Someone give the man a hat that fits!

THE ONE GOOD TURN DESERVES ANOTHER AWARD

For his “Yes Sir” tribute to Verne Lundquist on the day the venerable broadcaster worked his last college football game, reviving a phrase that Lundquist famously used during Nicklaus’ charge to Masters glory in 1986.

THE HANS AND FRANZ AWARD FOR MUSCLES IN UNLIKELY PLACES

For showing off washboard abs and bulging biceps more befitting of a full-time body builder than a 61-year-old grandpa. THE SHOT HEARD ‘ROUND THE WORLD, OR AT LEAST NORTHERN NEW JERSEY AWARD

For his scintillating eagle on the closing hole of the PGA Championship at Baltrusrol, which put a charge into the crowd and a fright into eventual winner Jimmy Walker, who still had to bring it to the house.

THE MOST FITTING FAREWELL AWARD

Winner: the family of Arnold Palmer

For organizing a memorial service for the King that was as warm and open and big-hearted as the man himself.