2015 PGA Championship Postcard Stories: Inside Where the Players Stay

The Marriott was sold out and 50 miles away so I did something I’d rather my bosses know about now: I checked into the posh American Club for one night last night, in the heart of downtown Kohler—$495 for the night, but the parking is free.

The lot was lousy with silver Mercedes, PGA Championship courtesy cars. This morning, a sleepy-looking Jason Dufner was in my hallway and last night at the Woodlake Market Organic Grocery Store, just down the street, Brandt Snedeker and I were eyeing the same baked goods. Later, at dinner at the Horse & Plow in the hotel, I had a quick hello with J.P. Fitzgerald, Rory McIlroy’s caddie. It’s always quick with J.P. Pete Bevacqua, CEO of the PGA of America, was in the breakfast room at seven this morning. Gary McCord of CBS was out for an early walk in the neighborhood wearing a UCLA t-shirt under his waxed mustache. Vince Cellini was in the gym last night. I actually was blanking on his surname until a minute ago when I typed “Vince” and “TBS” and “golf” into a google search. His Wikipedia page came right up: “Cellini was a lifeguard at Grovewood, a city pool on the east side of Cleveland. Vince was great with the local kids who came to the pool.” His weightlifting is impressive, too. I could relate more to Mike Hulbert’s workout, going nowhere slowly on a stationary bike. From Wiki: “Michael Patrick Hulbert (born April 14, 1958) is an American professional golfer and sportscaster.” At the 2012 Ryder Cup, Mike was one of Davis Love III’s assistants. Davis told me that one of Mike’s jobs was to stand by the elevator and make sure the players were wearing the correct pant-and-shirt combo as they came off it. Who knows what Davis will have him do next year.

In the middle of nowhere I saw an open, mown field with a heavy-duty motor home on it—a yacht on wheels with North Carolina plates—and a silver tournament-issued Mercedes next to it. It could have belonged to Davis, or maybe Rory Sabbatini. It was not John Daly’s. His screams “wild thing.”

Every major championship has one hotel where many of the top players and the game’s brass congregate, and that’s what the American Club is this week. The American Club is the Midwestern equivalent of the Lodge at Pebble Beach or the Carolina Hotel in Pinehurst. I would like to mock the place for its excessive charges and the pretentiousness you would expect to accompany them, but the fact is the place is manly, comfortable, handsome, and really not excessive. Well, to a point: the drapes are straight out of Versailles and so heavy you’d have to be Vince Cellini to lift them. I can only recall being in one darker room in my life, at a Sheraton near the Newark airport designed for pilots and flight attendants. 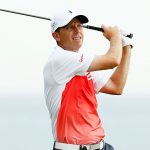 You cannot escape the Kohler name here. You find yourself staring at it while brushing your teeth. Your morning jog will take you past Kohler Memorial High School. Herb Kohler is often around, as are his people. He’s a jolly gent. Every time I see him—and that’s at all of golf’s glittery events—he’s smiling. He built Whistling Straits so his American Club hotel guests would have a nice course to play, nice being a relative term.

The village of Kohler has a sturdy collection of middle-class housing, a testimony to the kind of wealth American manufacturing once routinely produced. The serious wealth here is quiet, and you just get the sense that at some kitchen table somewhere nearby a collection of men with vast wealth and fine collections of antique shotguns are deciding who will be the next vice president of the United States.

Checkout time today was high noon and I got myself in the Milwaukee Marriott tonight for $175. My colleague Alan Shipnuck books his rooms months in advance but I make my hotel reservations as I get off the plane. I don’t know why—commitment-phobic, I guess. The water in the lobby at the American Club is infused with cucumber. I’d like to mock it but it was actually quite refreshing.