After a relatively calm Thursday at Whistling Straits, Friday’s second round of the PGA Championship presented several can’t-miss moments, from John Daly to Aaron Rodgers to Hiroshi Iwata.

Don’t worry if you missed any of the action; we’ve got you covered. Here are five points of interest from the second day at Whistling Straits.

1. A wicked storm stopped play at 5:28 p.m. local time
Dark clouds rolled in over Whistling Straits quickly, followed by intense wind and rain that caused some structural damage around the course. Play was stopped immediately and there are still 57 players who have yet to finish 36 holes. Play will resume at 7 a.m. local time Saturday. Check out photos of the damage below.

2. Aussies lead the pack
Neither player has competed 36 holes, but Jason Day (thru 14) and Matt Jones (thru 12) are tied atop the leaderboard at 9-under par. Both are 5-under on their rounds and lead Justin Rose by a stroke. David Lingmerth (F), Harris English (thru 15) and Tony Finau (thru 13) are two back at 7-under with another five players three shots off the lead. The rest of the leaderboard is here.

3. Rory McIlroy and Jordan Spieth put on a great show
Playing alongside one another with Zach Johnson, the top-two ranked players in the world traded blows all day Friday, with Spieth coming out on top with a round of 5-under 67. He sits three back at 6-under for the tournament. McIlroy finished with his second consecutive 71 and is 2-under, seven off the lead. There’s a good chance Spieth leaves Whistling Straits with the No. 1 ranking in the world, and it’s a shame we probably won’t see another head-to-head battle to decide it. 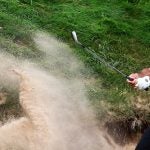 You may also like PGA Championship: Time for Jason Day to Realize His Awesome Potential

4. Phil Mickelson and John Daly were up to their usual tricks
Neither Phil nor JD played particularly well Friday (or Thursday for that matter) but both still caught attention for what they did on the course. On the eighth hole (Mickelson’s 17th) the 2005 PGA champion slid down a knoll on his butt. Daly’s act wasn’t quite as pleasant; the 1991 PGA champion tomahawked a club into Lake Michigan after his third consecutive ball in the water on the par-3 seventh. He walked off the hole with a 10 and finished the round with an 82.

5. Tiger Woods’ season isn’t over (yet)
Woods hasn’t missed the cut yet, but he’ll likely need to go 2-under through his final five holes Saturday morning in order to stick around for the last two rounds (he’s plus-4 and the projected cut is plus-2). It was also announced Friday night that Woods will play the Wyndham Championship next week at the Donald Ross-designed Sedgefield CC in Greensboro, N.C. He’s looking for a way into the FedEx Cup playoffs but needs his best finish of the season by far to do so. If that doesn’t happen, we won’t see him in action until the 2016 season starts (which, in fact, isn’t that far away).