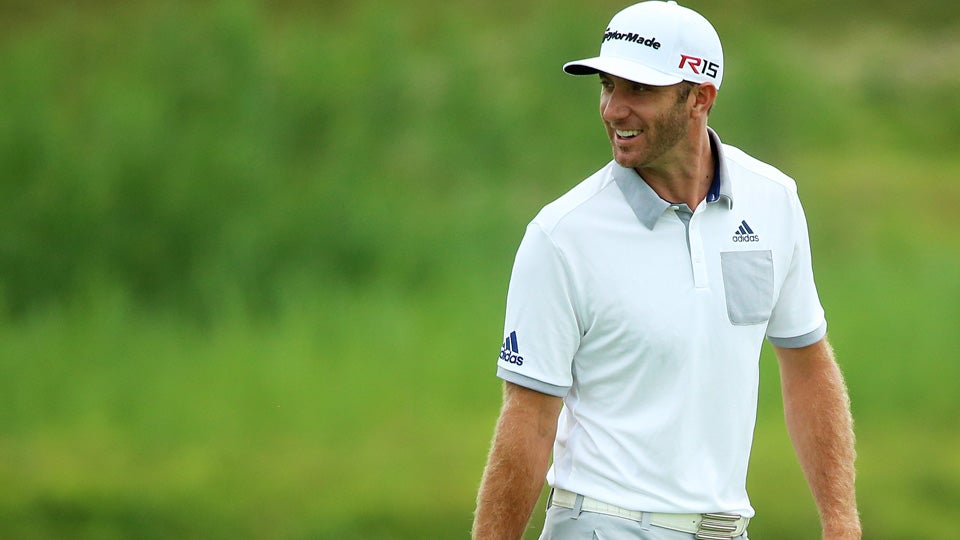 Dustin Johnson shot a first-round 66 at the PGA Championship at Whistling Straits on Aug. 13, 2015, in Sheboygan, Wisconsin.
Andrew Redington/Getty Images

HAVEN, Wis. – Dustin Johnson took advantage of calm morning conditions and used his driver to bludgeon Whistling Straits into submission to take the early lead at the 97th PGA Championship.

He was also pretty handy with his 5-wood.

Five years after he lost the PGA here—mistaking a bunker for a waste area on the 18th hole—Johnson swung the driver with impunity in a mostly gentle breeze Thursday morning, overpowering the course in much the same way he did in 2010. He signed for a 6-under 66, one ahead of Swede David Lingmerth and two clear of a logjam at 68 that included Jason Day.

“Today was pretty easy, I would have to say,” Johnson said. “I was swinging well and hitting the shots where I was looking.”

Memorial champion Lingmerth was the class of the afternoon wave of players, who were faced with stiffer winds that made birdies hard to come by. World Nos. 1 and 2 Rory McIlroy and Jordan Spieth, respectively, could manage only a pair of 71s while playing in the afternoon’s marquee group.

“It was a solid round of golf,” said McIlroy, who was coming off a five-week break after injuring his left ankle playing soccer. “Happy with the way I struck the ball. Obviously I was pretty nervous on the first tee.”

You may also like 2015 PGA Championship: Watch Rory McIlroy Make an Up-and-Down Par From the Water at Whistling Straits

Neither he nor Spieth appeared to be on his game, especially early as both players missed the first fairway. McIlroy hit the green but three-putted. A birdie at the par-5 second hole settled him, though, and as he said after the round, “I think anything under par this afternoon was a decent score.” He also reported no pain or swelling in his injured left ankle.

Spieth, trying to become the first player to win three majors in a season since Tiger Woods in 2000, three-putted the par-5 11th hole to go 1 over par. But he chipped in for birdie at the par-3 12th hole and birdied the par-5 16th coming in. And making a tough two-putt par at the difficult 18th to tie McIlroy, who had bogeyed the hole, also brightened Spieth’s mood. “We really battled back after 10 and 11,” he said, “which were disappointing holes for me, to salvage an under-par round and stay in this tournament.”

All of them will be chasing Dustin Johnson, the hard-luck loser at the U.S. Open at Chambers Bay, as they go out for Friday’s second round. In near total control at Whistling on Thursday, he eagled the par-5 16th hole (driver, 4-iron to roughly 30 feet, made putt), hit 10 of 14 fairways, and twice got up and down from the collar around the greens on the front nine—with his 5-wood. “It’s not a shot that I’ve ever really played,” he said. “But I was out here Monday, Tuesday and Wednesday trying to figure out how to hit those shots, I started using it, and it’s worked out very well.”

There was only one slightly anxious moment in the round as Johnson missed his target off the tee at the par-5 fifth hole, his drive coming down in the rough and leading to a brief search. A few fans hollered from beyond the gallery ropes, helping direct Johnson to his ball, and from there he wedged out of the long grass, hit the green in regulation and made an easy par.

You may also like 2015 PGA Championship Postcard Stories: Inside Where the Players Stay

Playing partner Day called Johnson’s round “solid,” and alluded to the seventh and eighth holes—where Johnson missed short putts—in adding, “He was very close to an 8- or 9-under par round.”

Justin Rose was among those who shot 3-under 69, while two-time major winner Martin Kaymer, who won the 2010 PGA here, shot 70.

Leader Johnson hit 15 greens in regulation and took 28 putts. His drive at the par-5 11th hole, where he would make birdie, traveled 357 yards.

Rickie Fowler, the third member of the Johnson-Day group—dubbed “the best players never to have won a major”—pulled his tee shot over the cliff at the par-3 third hole and made a quadruple bogey. He shot 73.

You may also like 2015 PGA Championship: Tiger Woods Drops F-Bomb on Third Hole

Tiger Woods, playing in the group behind them, shot 75 after hitting just seven of 14 fairways and taking 33 putts.

“I hit it great today,” Woods insisted. “But I made absolutely nothing. Probably one of the worst putting rounds I’ve had in a very long time.”

Their struggles made the eighth-ranked Johnson’s round look even better. At 31, he has survived of a career’s worth of heartache—a final-round 82 to fall out of the lead and then some at the 2010 U.S. Open at Pebble Beach, his bunker-waste area confusion at Whistling later that year, his late stumble (2-iron out of bounds at the 14th hole) as he tried to put pressure on eventual winner Darren Clarke at the 2011 British Open.

Johnson’s shocking three-putt on the last hole of the U.S. Open at Chambers Bay earlier this summer gave way to a slow dissolve at the British Open at the Old Course at St. Andrews, where he led through 36 holes but shot 75-75 on the weekend. At that point it seemed he might never win a major, no matter how good he’d looked amassing nine Tour wins—the latest a bravura performance at the WGC-Cadillac at Doral in March.

But here he is again, in the lead in Wisconsin.

“All I’m looking for,” Johnson said after his round, “is a chance to get it done on the back nine on Sunday.”