An aerial view of the 17th hole at St. Andrews during the 2010 British Open, won by Louis Oosthuizen.
Sports Illustrated/Bob Martin

When was the last time there was this much excitement heading into a major championship? And that’s with the world’s top-ranked player and defending champion unable to compete, and Tiger Woods hardly in the conversation.

The hottest player in the world, heading to the Home of Golf with a chance to knock out the third leg of the Grand Slam less than a week after shooting the lowest round of his career? What more could you want? (Yes, Rory in the field would be nice. But let’s not get greedy.)

A look at the winners of the British Open since 2003—as far back as detailed statistics are available—reveals putting as the central key to victory. In that time frame each British Open champ has finished top-10 in either putts per round or putts per GIR, with the exception of Ben Curtis in 2003, Woods in 2006 and Ernie Els in 2012.

The large, wavy greens that characterize links courses demand experience, concentration, precision and patience—St. Andrews, of course, will be no different. Louis Oosthuizen won at St. Andrews in 2010 and led the field with 119 putts; Woods won there in 2005 and finished T1 in putts with 120.

Here is a look at our picks for this week, along with info on each player’s putter and odds from GolfOdds.com.

Who could be hungrier for a major championship victory than Dustin Johnson? He hasn’t played since the nightmare at Chambers Bay, but he has a history of quick rebounds. After the bunker/waste area debacle at Whistling Straits in the 2010 PGA Championship, he won the BMW Championship a month later. After flinging a 2-iron out of bounds Sunday at the 2011 British Open at Royal St. George’s, he won the Barclays the following month. A short memory, indeed. 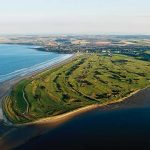 You may also like 11 Random St. Andrews Facts That You Can Impress Your Friends With

DJ has two top-10s in British Opens: a T2 in 2011 and a T9 in 2012. He is second on tour in putting average and 10th in one-putt percentage (42.93 percent). He’s not widely thought of as a good putter, but the numbers say otherwise. If his ball-striking is anywhere near as impressive as it was at Chambers Bay, DJ will be right there.

Totally overshadowed by Rickie Fowler’s clutch Scottish Open victory last week was Matt Kuchar’s T2 and his four consecutive rounds of 68 or below at Gullane GC. Kuchar is seventh on tour in strokes gained/putting, second in one-putt percentage (44.27 percent) and 10th in putts per round (28.15). He finished T9 at the British Open in 2012 and was T12 at the U.S. Open at Chambers Bay, but nothing is more convincing than his play in the wind at Gullane last week.

Kuchar is putting with a Bettinardi Kuchar Model 2 mallet. His model has 6° of loft to accommodate his arm-lock style grip that significantly delofts the face.

The Swede finished second at the BMW International Open a week after a disappointing finish at Chambers Bay, where he followed a first-round 65 with 74-72-74. He’s brought his best golf to major venues in recent years (with two top-10s last season) and finished second in the British Open in 2013 and T3 at St. Andrews in 2010. Stenson is 14th on tour in strokes gained/putting and ninth in putting from four to eight feet (75.86 percent). He finished T4 in putts at St. Andrews in 2010, and that T3 finish in 2010 included a 74 and a 71.

The guy with the last two major titles in his pocket is playing his best golf of the season, which should scare everyone else in the field. Spieth shot a career-low 61 Saturday, won the John Deere Classic Sunday in a playoff that felt more like a formality and was on the course at St. Andrews around noon EST Monday. Simply put, that’s ballin’.

Through the John Deere, Spieth is eighth in strokes gained/putting, first in putting average, third in one-putt percentage (44.01%) and first in putts per round (27.72). He’s the only guy in the field at St. Andrews with a legit chance to accomplish something this season that nobody else ever has, and the 21-year-old is the kind of player who thrives on that pressure. What more can we say?

Spieth is putting with a Scotty Cameron 009 prototype, the same putter he’s used since junior golf.