A 2-handicap shooting…123? Check out these conditions and you’ll see why 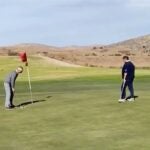 It was a windy day at Rustic Canyon.

On Sunday, the day before the Tournament of Club Champions, Rustic Canyon was calm and clear, an idyllic 70-degree Southern California day.

On Monday the wind kicked up and the course turned to mayhem.

Of the 93 club champions in the field — each of them with a handicap index at 2.4 or lower — just two golfers broke 80 on the day, and they were in the first group out, before the worst of the winds. Scratch golfers were four- and five-putting left and right. Twenty-six golfers withdrew or didn’t turn in their cards. One particularly resilient 2-handicap made four double digit scores, including a 12-putt for 18, and carded a 51-over 123.

“I’ve played a lot of golf in my days,” said one competitor, Andy Ho. “Scotland, Asia, Australia, Texas. Lots of weather, wind, etc. Yesterday was the single most difficult day of golf in my life.”

Ho plays to a 2 handicap himself. He lost only one ball on the day and, he said, hit some terrific shots. He arrived on the 18th tee needing triple bogey to break 100. He made quad.

The next day, Ho recalled some of the round’s most memorable scenes. Puring driver 175 yards on one hole, and more then 350 the very next. Rustic Canyon’s own club champion walking off midway through the round, like so many of his fellow competitors. His buddy Greg Jacobs, who didn’t lose a ball and shot 93 with 48 putts.

“It was laughable and frustrating,” Jacobs wrote on Twitter after the round, but finished more hopefully: “Memories for life!”

First, a note on the 99 — because that comes with some video evidence. Check out Mark Peterson trying to negotiate a four-footer and then see what happens afterwards:

The 123 belonged to Grant Beachley, and credit to him for turning in a scorecard like this one. Beachley’s day actually got off to a fairly tame start, as he sat just four over through four holes. But he made a quadruple-bogey 9 at No. 5, then reeled off a stretch of 8-12-8-7-6-10 on holes 8-13 to balloon to 35 over. Naturally, he followed that 10 with the group’s only birdie of the day, hitting his approach inside six inches at No. 14.

But his masterpiece came at Rustic’s finishing hole, the par-4 18th, which averaged 6.12 strokes for the field. Beachley hit two balls out of play, so he was lying 6 when he got to the green. The pin was in the front, but the hole was playing straight downwind, so Beachley kept trying to putt back up to the pin to no avail.

Twelve putts later, Beachley finished off his 18 to round out a full day.

“I only missed three fairways all day,” he wrote after the round. “Brutal. 12-putted 18. Couldn’t get a ball to stop moving to mark. 45 mph winds on perfect undulating greens running at 12…”

Was it the most fair day to be competing for a championship? Perhaps not. But it’s hard to imagine a more memorable 18 holes. And it’s only fitting that this particularly torturous test came at the beginning of the brutish U.S. Women’s Open week.

You can see complete results here.

2021 Fortinet Championship live coverage: How to watch Thursday's first round