14 Tour Pros Who Could Be the Next Bond… or Bond Villain! 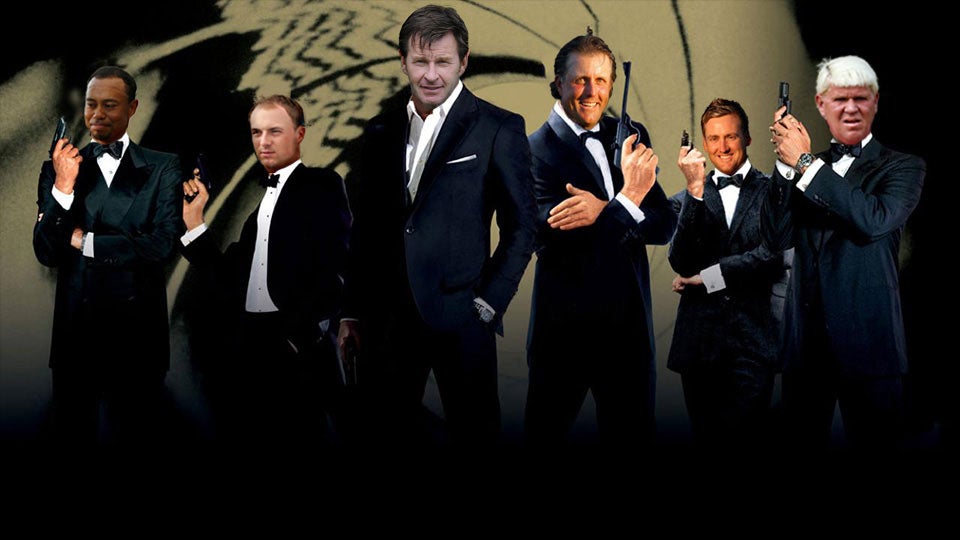 Who is the James Bond of Golf?
Composition by Kaitlin Santana

In honor of the new James Bond film, Spectre, which is set for cinematic release this Friday, the European tour conducted a poll to determine which player would make the best Bond. Henrik Stenson got the nod. But we think he should have to earn the role. Here are six other golfers who would make dashing 007s, along with another eight who fit the part for Bond villains.

Energetic, smooth and icy under pressure, he’s everything Her Majesty could ask for. If only he’d stop pestering Q to design him a driver that can give him another 25 yards.

Baccarat? Please. This left-handed Bond with an aw-shucks grin that melts women and men alike gets his rush from NFL spreads. In the climactic scene at the Caesars Palace sports book, he and gold-toothed casino magnate Johnny Bling place a billion-dollar head-to-head wager on the outcome of the Super Bowl. Bond prevails, then celebrates by signing autographs on the cashier line. As the credits roll, he nods sheepishly at the camera and flashes a thumbs-up.

Like 007, he’s never better when serving Queen and country, but that’s not where the similarities end. He’s also fond of fast cars, fancy clothes and extravagant gadgets, which have helped him out of some tight spots but haven’t been much use in stroke-play events.

His name is Bond. Sir James Bond. And he’ll implore Jim Nantz to repeat it on the air again and again. Bonus points for being exceedingly British.

In Tiger’s first turn at the role, 007 sets off in search of his mysterious doppelganger, who went missing in action sometime around 2008.

OK, not really. But directors love him for his Deniro-esque ability to work at different weights.

By turns charming and churlish, the criminal mastermind also known as El Nino has the requisite exotic accent of a Bond-film baddie and a long-iron game that the ladies love. Often comes to the brink of world domination, only to self-implode, threatening to take civilization with him.

From an underground lair somewhere beneath a high-end West Palm Beach shopping plaza, the rapacious Shark pledges to sink his teeth into every corner of the global economy. His best-known quote: “Goodbye, Mr. Bond. I’m off to acquire a distressed golf clothing line.”

A shadowy figure with a checkered past, he comes to the attention of the British Secret Service with a string of surprising conquests, then undermines his credibility by proclaiming himself “one of the top five villains in the world.”

Aside from evil plans and intimidating sidekicks, Bond villains are at their malevolent best when stroking hairless cats. In Wie’s case, a yappy little lap dog will do.

Painfully deliberate and addled by a textbook-worth of irritating ticks, Dr. Na draws up a malicious agenda, but it unfolds so slowly that Bond nods off before discovering what it is.

What appears at first to be a dorky fashion statement is actually a deadly gold-brimmed bucket hat, which this sinister septuagenarian wields with Oddjob’s cold efficiency.

Remember Moonraker? The film they should have made was Bunkeraker, featuring Stevie as a Jaws-like goon who starts out as Bond’s buddy then writes a petty tell-all about him, roughing up a few photographers along the way.

There’s nothing remotely villainous about him. He just sounds like a guy who’s up to no good.