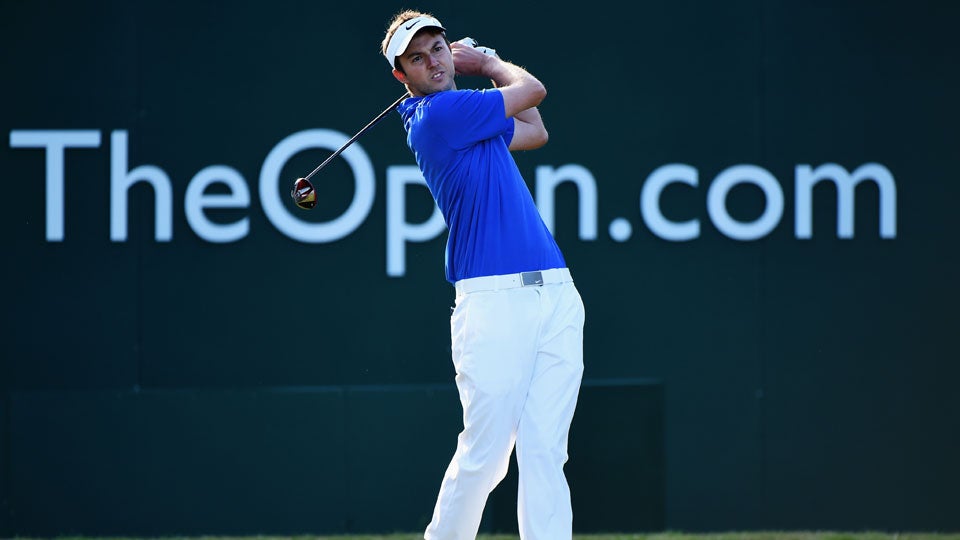 Ashley Chesters of England tees off at the first hole during the first round of The 143rd Open Championship at Royal Liverpool on July 17, 2014 in Hoylake, England.
Getty Images

Ashley Chesters, Nike Golf’s latest signee, sounds off on his celebrated amateur career, recent professional debut and the record he shares with Tiger Woods. Chesters is a two-time winner of the European Amateur and finished in a tie for 12th place at the 2015 British Open.

How did you learn the game?

My dad taught me. He’s a scratch golfer and played on the county team. We lived about a mile from our local golf club, so my dad used bring me up there in the evening and let me putt around the green. I gradually got more and more into it.

Who did you grow up watching on Tour?

I liked Tiger, but I really liked Sergio. I know he’s not as popular in America, but when he first started, he was so young and so exciting to watch. I still remember the shot he hit from under the tree on the 16th at Medinah in the 1999 PGA when he ran up the hill and jumped. It was so cool.

When did you realize that you might be good enough to play professionally?

We have a junior open at my club, and I won when I was 14 years old at 19-under through four rounds. I think it’s still a record. That’s what I thought that not many people could do what I could do.

Don’t change what you’ve been doing. I’ve got a bit of a funky golf swing, and I did have a minute when I tried to make it more normal, but it didn’t really work, so there’s been quite a few people who have said, “It’s gotten you this far, so stick with it and see how far it can take you.”

You won back-to-back European Amateurs and it was reported that it delayed your decision to turn pro. Was that a tough decision?

It was. After I won the second time and qualified for the Open Championship again, I went to European Tour Q School, but my head wasn’t really in it. I had enjoyed the Open so much the first time and wanted to play again, so I wasn’t sure if Q School was the right decision. Either way, I didn’t play well, so after that was sorted there was only one option for me anyway: play the Open again, play the Walker Cup and then go for it.

Tiger Woods and Eduardo Molinari are the only other amateurs to qualify for back-to-back Open Championships. That puts you in pretty elite company. Is that a feather in your cap or a comparison that weighs heavily on you?

[Laughs] Let’s put it this way. Whenever the next guy does it and he gets asked the same question, I hope by then he thinks the same way about Ashley Chesters as he does about the other two names.

You were one of a host of talented amateur contenders at the Open at St. Andrews this year. Do you think that was the moment that launched your star?

Hopefully! T12 in the Open as an amateur. We have an amateur event there every year, but I’ve never done very well in it. My best score before that Open week was 72, so I beat my previous best in three of the four Open rounds. I would have picked up quite a bit of money, so it made me think I could actually do something with this game.

Was it surreal to be out there playing with all the pros you grew up watching?

Totally. In the last round at St. Andrews, I had a putt to tie for the lead, and I was looking at the leaderboard and saw my name next to Jason Day and Jordan Spieth. I’d been watching them on TV the week before, and now I’m up there with them.

You missed the cut in your professional debut at the Alfred Dunhill Links Championship. Were you nervous?

I was a bit nervous. When you’re an amateur, even if you’re in a pro event, there’s still the ‘a’ by your name, so if you hit a bad shot, that’s OK because people expect that from an amateur. As a pro, everyone expects you to hit a good shot every time. That got in my mind a little bit. Dunhill Links is also a pro-am event, so it was a bit different looking after somebody as opposed to somebody looking after me. It was really nice to do it. Just a shame I didn’t play better.

You’re 26. Did it take you longer to become a professional golfer than you would have thought?

I had some ups and downs, but I just wasn’t really ready a few years ago. A lot of people turn pro when they’re younger and get lost in the pro game because there’s so many different tiers to it. I think I would have gotten lost as well. I’ve been really lucky in the amateur game. I’ve played in the Walker Cup. I’ve won the European Amateur twice. I competed in the Open Championship twice. I’m a bit older now but thanks to all those experiences along the way, I’m more ready now than ever.

What are you goals in your first year as a professional?

A lot of it will depend on what happens at European Tour Q School in November. If I get my card, I’ll be fighting to keep it. If not, I’ll be looking at the Challenge Tour and other options. Hopefully I’ll play well and just take it from there.

Do you have any bigger goals for your golf career?

I’ve always said if I could go out everyday and play golf and have that be my job, I’d be happy. I realize that when you get to that stage you want more, so that’ll be when I look at Ryder Cups and other goals, but for now if I can play golf everyday for the rest of my life I wouldn’t have any complaints.